Well y’all the time has come. Time for my monthly “reads” post and also the time to tell you that this month I have officially hit my goal for the year!!! I think I underestimated how many book I actually read now that I’m finished with school and all. I also spent a LOT of time in the car which meant lot os opportunity for listening to my audiobooks!! Yes, audiobooks totally count as reading. Or they do in my little world…HA!!

In case you are a new reader (or have forgotten), one of my New Year’s Resolutions was to read 50 books this year. Now at the time I made that “lofty” goal I honestly didn’t know how many books I read per month on average and so I thought 50 sounded like a good number. After adding 10 books from this month I have officially hit 53 books for the year so far and now I know to increase my goal for next year!! What can I say, I love to read!! 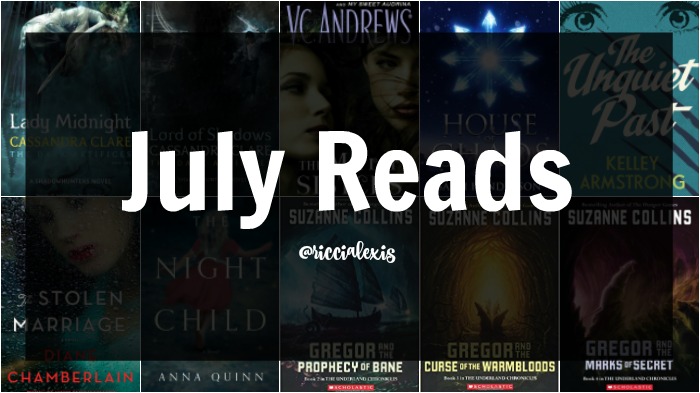 So you already know that I “read”/listen to a lot of audiobooks. I also get books to read before they are published, one of the perks of being a blogger, and so a few of the books I read this month aren’t out yet but I will tell you a little bit about them anyway!

Now let’s see what all I read this month!! 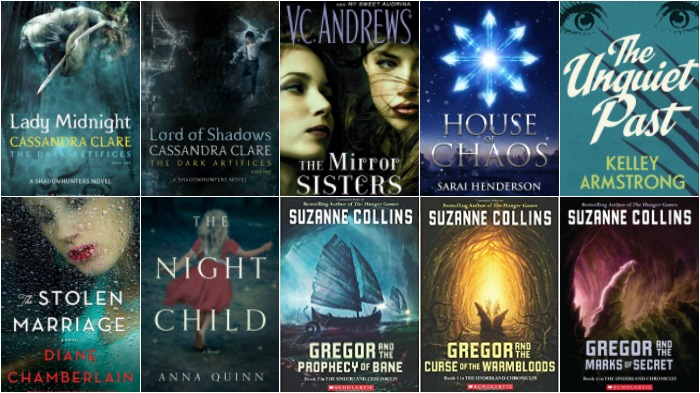 ONE. Lady Midnight by Cassandra Clare. I know that Cassandra Clare books got a bad rap after that failure of a Mortal Instruments movie (which I, of course, loved) but I kept on reading the series and I’m glad I did!! I loved her entire Mortal Instruments series as well as her Infernal Devices series and the Bane Chronicles. I love how all of the books tell Shadowhunter stories and use the same characters so it’s like you are getting to know all of the different characters again! I also love how she brings characters back into different books so you get to love them again, HA! This series, the Dark Artifices series, follows the story os Emma and Julian which were originally introduced at the end of the Mortal Instruments series. Jace and Clary are back in this series and it’s just a good read about the Los Angeles Shadowhunters!! You have to read it if you are a Mortal Instruments fan!!

TWO. Lord of Shadows by Cassandra Clare. This is the second Dark Artifices book in the series and it was just as good as the first!! Now I need more. Le sigh..

THREE. The Mirror Sisters by VC Andrews. Last month I waxed poetic about my love of all things VC Andrews and reading that short novel promoted me to order several of her new books that I haven’t read yet. The Mirror Sisters had a bit of a slow start to me and of course got really good right at then end, ugh. However I can’t wait to read the next book in that series because now I have to know what happened!!

FOUR. House of Chaos by Sarai Henderson. I think we all know by now that I love a good YA book series and this one os a new one for me. New series, new author, new everything! I really enjoys this book because it wasn’t the typical love triangle and girl has to choose which boy to be with for the rest of her life. The angle on this book was that girl doesn’t know who her family is and she’s on a quest to figure out who she is while trying to stay alive. It’s a good concept and I enjoyed this book and I hope the series continues!!

FIVE. The Unquiet Past by Kelly Armstrong. This is a book I checked out from my local library and is set in the 1960’s in Canada. It’a about an orphan girl who goes in search of her family while following a mysterious clue left in a box. This is the first Kelly Armstrong book I have read and her writing reminds me of Lois Duncan and I loved all of her books!! Apparently this book is one in a series so you know I will have to read the rest…LOL!! Sometimes my OCD isn’t a bad thing…HA!

SIX. The Stolen Marriage by Diane Chamberlain. I have a deep love of Diane Chamberlain books, I discovered her a few years ago and have read several of her books since then. This particular book won’t be released until October 3, 2017 and if you are into history, mystery and twisting plot then you need to read this book! It’s set in 1944, right in the middle of the war and polio epidemic and is the story of a woman who had everything figured out in her life until one crazy night when she made a mistake and had to give up life as she knew it. It’s a page turner for sure!!

SEVEN. The Night Child by Anna Quinn. This is another book I got to read before it was published and if you are into psychological thrillers then this book is for you! It’s about a normal, everyday teacher with a normal, everyday family who finds out she has a split consciousness and winds up having a complete psychological breakdown. It’s truly riveting and eye opening and will be released officially on January 30, 2018!

EIGHT. Gregor and the Prophecy of Bane by Suzanne Collins. Yes, you read that right. This book series is the same Suzanne Collins who wrote the mega hit Hunger Games series. The Underland Chronicles series was actually written before the Hunger Games and I think I like it even better? I read the first book a while ago and was waiting on my library to get the audiobook versions of the next few. This book series has five books total and I am actually reading the last one right now!! This series is about a kid from NYC who discovered a whole city of people and animals living in a land called the Underland underneath NYC. It’s full of adventure and life or death situations and I love all the relationships the people and animals have. It’s a page turner for sure and I wonder why it hasn’t been made into a movie series yet??

NINE. Gregor and the Curse of the Warmbloods by Suzanne Collins. This is third book in the Underland series.

TEN. Gregor and the Marks of Secret by Suzanne Collins. This is the fourth book in the Underland series.

So there you have it, my June Reads!! You can check out my previous month’s reads here…January, February, March, April, May and June. Hope you found some inspiration and maybe something new to read!!

Do you enjoy reading??
What was the last book you read??