You know what the truly beautiful thing about blogging is? Having the ability to take a break if you want to. I haven’t logged on to this space in over a week and I think that is exactly what I needed, a small break and time to think. Work has been super busy, I have not gotten nearly enough sleep and I have just had too many things to do and something had to give so blogging it was. I don’t know about you, but it’s completely refreshing to step away from something and then come back to it super excited and feeling super motivated about it.

During my weak-ish absence I have been a reading fool. I haven’t watched TV at all but I don’t even care because the books I have been reading are amazing!! One of my goals for this year was to read 50 books and I started off January by reading 5 books. Well I definitely upped my game in February because I read 8 books this month! I am actually almost finished with two more (one audiobook and one actual book) but I didn’t completely finish them so I will include those in my March post.

Each book I read this month was so good!! Some are similar and some are different but they were all amazing! I felt like January was a little YA heavy but I definitely switched it up in February. So let’s quit talking about it and get to it! Here is what I read in February… 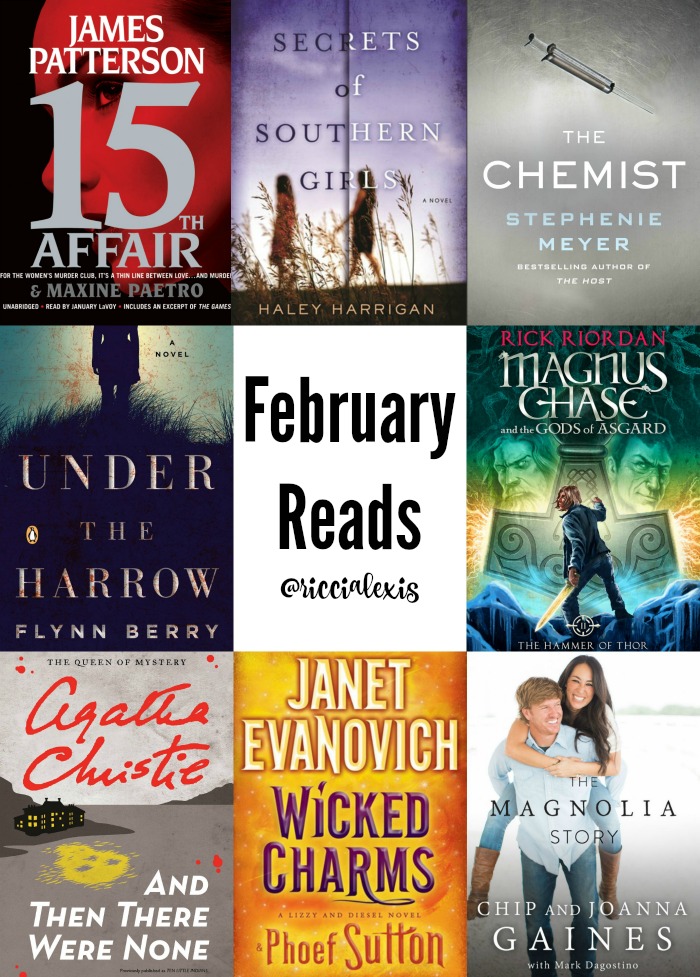 ONE. The 15th Affair, A Women’s Murder Club Mystery by James Patterson. My friend Leslie got me into The Women’s Murder Club books a few years ago and I have been a woman obsessed ever since. I always swore I would never get “into” long book series but I love me some James Patterson and following his characters along in these long series is fun! I’m not going to recap the book for you but if you love murder mysteries and have read the rest of this series then you should definitely check out this one!

TWO. Secrets of Southern Girls by Haley Harrigan. Ok, so this book doesn’t officially release until June 6 of this year but if I were you I would definitely pre-order it now! It is soooo good!! It’s a chick-lit meets murder mystery and has all the southern charm and big city life you could ask for all rolled into one. I think Haley Harrigan will definitely be an author to watch out for if this book is as big a success as I think it will be!

THREE. The Chemist by Stephanie Meyer. From the writer of the Twilight series and The Host comes another gripping page turner…when I tell you I killed this book in two days then you better believe it. I love the mystery surrounding the main character and the dogs!! I also have a new found respect for chemists and doctors, HA! Overall if you need a good YA/not so YS book with a little murder and a lot of mystery then I would check this book out!

FOUR. Under the Harrow by Flynn Berry. This book was compared to The Girl in Cabin 10, Gone Girl and The Girl on the Train so of course I jumped at the chance to read it! However it took a while to get into and I didn’t like it nearly as much s the others. Maybe it’s just me??

FIVE. Magus Chase and the Gods of Asgard, The Hammer of Thor by Rick Riordan. I love me some Percy Jackson and pretty much all of Rick Riordan’s books and this one was no exception. This book follows the lives of Norse Gods and their children and it jus so dang good! If you liked PJ then definitely try this series!

SIX. And Then There Were None by Agatha Christie. Oh Agatha Christie, the mother of all suspense writers. I saw this book on my library’s e-book app and realized just how long it had been since I had read it so I decided to listen to it. It took a minute to really get into but once I was there I was hooked again. it also helps that I had completely forgotten who the real killer was, HA!

EIGHT. The Magnolia Story by Chip and Joanna Gaines. Apparently I saved the best for last. Now I am not one to watch a ton of HGTV but I have seen a few episodes of Fixer Upper and love it so when I saw this audiobook available at my library I knew I had to read it. This is the story of how Chip and Joanna met and where it all started. They talked about their ups and downs and how they got to where they are today. They sound like such interesting people and now I want to go to Waco and see their store and the town!! One day…

So that’s it for me for February books. I hope maybe you found something you want to read and I can’t wait to share my March reads with you!!

What have you been reading??