It’s that time of the month, time for my monthly “reads” post which also means it’s the end of the month…I can’t believe June is over!! The first half of this year has really just flown by and I don’t even know how that happened. I guess time really does fly when you’re having fun! Or something like that…

Anyway, in case you forgot I am recapping my monthly reads as part of my New Year’s Resolutions which was to read 50 books…although honestly I think I underestimated how much I actually read because including this month’s books I am up to 43. HA!!

I always have a lot of people comment on these posts asking me how I read this month and where do I find the time?? I mean I work a full time job, work on this blog, watch a lot of Netflix and try and make some form of a social life happen. It’s true that I don’t always have time to sit down to read a book so instead I listen to a lot of audiobooks. My local library has an e-library that you can check out both Kindle books and audiobooks and they just so happen to have a fantastic selection of books to choose from!

I also went to the beach so a lot of listening was done on the road trip there (while my passengers slept) and on the beach itself. Let me tell you that there is absolutely nothing better than reading a good book on the beach. And yes, I took an actual book to read on the beach. It was fabulous!

I also carved out a few hours of reading actual books before bed each night. I used to read books on my phone’s Kindle app before bed but then I just kept getting distracted with Facebook and Instagram and that was no good.

Enough rambling, let’s get to what I read!!

ONE. Someday, Someday Maybe by Lauren Graham. Back in April I read Lauren Graham’s Talking as Fast as I Can and that’s when I found out that LG had previously written a fiction book loosely based on her life called Someday, Someday Maybe. You better bet that as soon as I finished Talking I hopped on Amazon and ordered the book. I read it in a couple days and I freaking loved it!! It’s based in the 80’s in NYC and is all about Franny who is trying to break into the world of acting. It’s hilarious and makes me want to go back to the days of no cell phones or Google….sorta. But let’s be real I can’t live without my iPhone or Google. Ugh. Anyway, if you love Lauren Graham as much as I do then you should read it.

TWO. After You by Jojo Moyes. I am a little bit embarrassed to say that I bought this book after watching me Before You in theaters and it’s been sitting on my nightstand ever since. After powering through Someday, Someday Maybe I made myself finish this one and I honestly don’t know why I didn’t finish it before. It takes place after the first book and is all about Louisa and how she’s coping with life. I really love me some Louisa and this book was sooooo good!!

THREE. Curious Minds by Janet Evanovich. This was a quick read by Janet Evanovich who also wrote the Stephanie Plum series. I have read several of her books since then and have loved them all! This one is about a quirky millionaire who meets a new grad from Harvard Law and they go on a grand adventure to fins some missing gold. Sounds silly but it’s really good, I promise. I actually learned a lot about gold too!!

FOUR. The Visibles by Sara Shepard. I bought this book a million years ago after I read The Heiresses by Sara Shepard (she also wrote the Pretty Little Liars series and The Lying Game series…speaking of, who remembers that show?? I loved it!!!). It has literally sat on my nightstand for almost a year and so I threw it in my beach bag and read it while I was on the beach over the course of a couple of days. This isn’t Sara Shepard’s typical book but I still liked it. It’s no Heiresses but it was still a pretty good read.

FIVE. Coraliss by VC Andrews. Let me just stop right here and tell you about my deep love for everything VC Andrews. One summer when I was 12-ish I was staying with my G-Joy (Dad’s Mom, my grandmother) and I ran out of books to read so she had me read Flowers in the Attic and I fell hard. I ate it up and read every other book in the series as well. I’m not sure it’s appropriate material for a 12 year old but I didn’t know any better. Since then every time I was out at a garage sale or flea market and I would see any VC Andrews book my Mom would get them for me. So needless to say I have a very large collection of VC Andrews books!! HA!!

VC Andrews died in the late 80’s but left several unfinished manuscripts that a ghost writer finished. Since then several book series have been written under name and I love them all! I confess that I haven’t read many of her latest series but I did pick up Coraliss from the library and finished it in an afternoon. It’s the first book (a mini book) in a new series and I can’t wait to read more!!

SIX. The Goddesses by Swan Huntley. This book actually isn’t even out yet! Oops! I got it from NetGalley books in exchange for my opinion. The Goddesses officially debuts in late July 2017 and is about a family that is falling apart and so they movie to Hawaii to work on their problems. Long story short the wife makes a new best friend who may not be everything she seems to be. It’s a really good read and I really like this author’s style!

SEVEN. Birthmarked by Caragh M. O’Brien. This is the first book in a series by Caragh M O’Brein about a girl in a dystopian society that is about to fall apart. Sound familiar? HA! I am going to admit right here that I love a good dystopian trilogy and this book didn’t disappoint. The main character, Gaia Stone, is a midwife that gives the first three babies born every month to the people of the Enclave because their mothers are having problems having healthy babies. After her parents are taken away Gaia has to face her fears and try to save them as well as herself. It’s a true thriller!!

EIGHT. Prized by Caragh M. O’Brien. This is the second book in the Birthmarked trilogy and is just as amazing!!

NINE. Promised by Caragh M. O’Brien. This is the third book in the Birthmarked trilogy and the ending is truly spectacular!!

So there you have it, my June Reads!! You can check out my previous month’s reads here…January, February, March, April and May. Hope you found some inspiration and maybe something new to read!!

Do you have a reading goal for the year??
What’s the last book you read (or listened) to?? 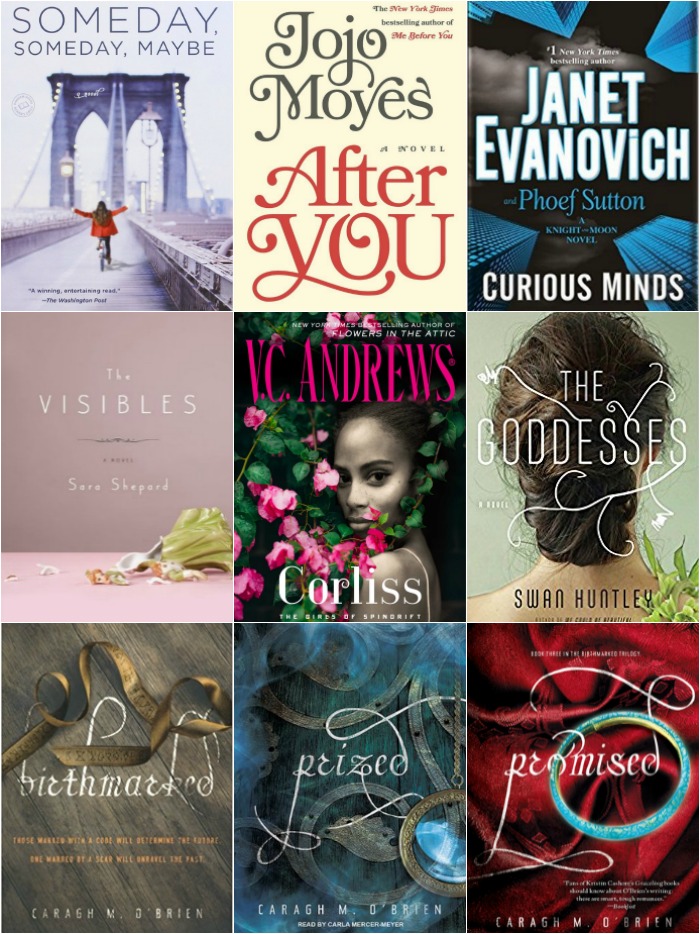