Alright guys…it’s time for one of my favorite posts of the month…my monthly “what I’m reading” post!! Today I will be talking about all of the books I read in the month of November. Last month was so dang busy I felt like I didn’t get to read much but really I just read some pretty long books but somehow still managed ot get nine books in for the month!

I always get a lot of questions on how in the world I read so much and I feel like I need to tell you that I don’t spend the month curled u on my couch reading….HA! In reality I listen to a lot of audiobooks. I “check them out” via my local library’s website and download them to an app on my phone. I listen to books when I’m getting ready to go to work, when I’m driving, when I workout, when I’m cleaning the house, etc. I guess most people listen to music but I prefer to “read”. #BookNerdFoLIFE

So anyway, enough of explaining how I read so much and let’s get to what I actually read!

ONE. Warcross by Marie Lu. In a world where gaming is a way of life Emika Chen, world class hacker and bounty hunter, is a threat to the Warcross way of life. This book follows Emika as she goes from hacking into the game of Warcross to becoming one of it’s most well known players in the blink of an eye. However she’s not just playing the game, shes also working as a spy to help discover the person behind several glitches in the game. I loved this YA book and got sucked into the world of Warcross and couldn’t wait to read the next one!!

“A vibrant, action-packed shot of adrenaline. Lu delivers characters with heart and determination, then sets them loose in a luminously conceived world of infinite possibility.”—Leigh Bardugo

TWO. Wildcard by Marie Lu. This is the second book in the Warcross series and is a continuation of the first book and delves even deeper into the world of Warcross and the “dark world”. Seriously amazing series!!!

“Lu’s futuristic world, with its immersive technology, feels dangerously within reach in this action-packed escapade with a thoughtful, emotion-driven core.”—Publishers Weekly

THREE. I Owe You One by Sophie Kinsella. This book doesn’t come out until February 2019 but I got an advanced reading copy as a part of a blog program. This book is about a girl named Fixie. Fixie’s family motto is “family first” and it’s a motto Fixie takes very seriously, so seriously in fact that she has put everyone in her life first except herself. In this book Fixie has to fix the most important thing in her life, herself as well as solve everyone else’s problems and save the family store. Can Fixie do it without losing her mind??

“[A] fun story about family, loyalty, and taking charge of your own life . . . Kinsella creates a charming story full of quirky characters and laugh-out-loud dialogue. . . . [Her] many fans will devour this warm and hilarious read.”—Kirkus Reviews

FOUR. The Lying Game by Ruth Ware. From the author who wrote The Woman in Cabin 10 comes another psychological thriller, They Lying Game. This book is about four friends who hold each other’s deepest, darkest secrets and the biggest one is about to come out in the open. I didn’t see the ending of this book coming, it was super dark and twisty and I loved it!

“So many questions….Until the very last page! Needless to say, I could not put this book down!” —Reese Witherspoon

FIVE. The Trapped Girl by Robert Dugoni. This is the fourth book in the Tracy Crosswhite series and I have to say that I am loving it! This series follows Tracy Crosswhite (duh) who is a detective for the Seattle Police Department and solves some pretty graphic homicides as well as cold cases on the side. If you are into murder mysteries then you have to check out this series. It’s FREE on Kindle Unlimited if you subscribe!

“Well written, and its classic premise is sure to absorb legal-thriller fans…The characters are richly detailed and true to life, and the ending is sure to please fans.” —Kirkus Reviews

SIX. Close to Home by Robert Dugoni. This is the fifth book in the Tracy Crosswhite series.

SEVEN. A Steep Price by Robert Dugoni. This is the sixth book in the Tracy Crosswhite series.

EIGHT. A Court of Mist and Fury by Sarah J Maas. This is the second book in the Court of Thorns and Roses which I read last month. I love the twist this book took and the ending was pretty spectacular. The main character really finds herself and comes into her own as well as protecting all of the people she loves. Side note- there are some pretty graphic sex scenes so I’m not sure if I would qualify this as “young adult” anymore…maybe more just adult? LOL!

“A gorgeously written tale as lush and romantic as it is ferocious. Absolutely spellbinding.” ―Alexandra Bracken

NINE. The Break Down by B.A. Paris. If you like psychological thriller then B.A. Paris is your girl! Since I read this book I have finished another book of hers and am currently reading a third….LOL!! This book is about a woman who questions every decision she makes after a woman she saw in car on the side of the road was found murdered the next morning. Her mother suffered from early onset dementia and she finds herself forgetting every little thing as well as being on the receiving end of some pretty disturbing phone calls since the murder. I never saw the end of this book coming and can honestly say I was shocked!!

“A story with a ratcheting sense of unease ― a tale of friendship and love, sanity and the terrible unraveling of it.” ―USA Today

And that, my friends, is what I’m reading in the month of November. If you want to catch up on my previous month’s book posts here are January, February, March, April, May, June, July, August, September and October!

What books have you been reading lately?? 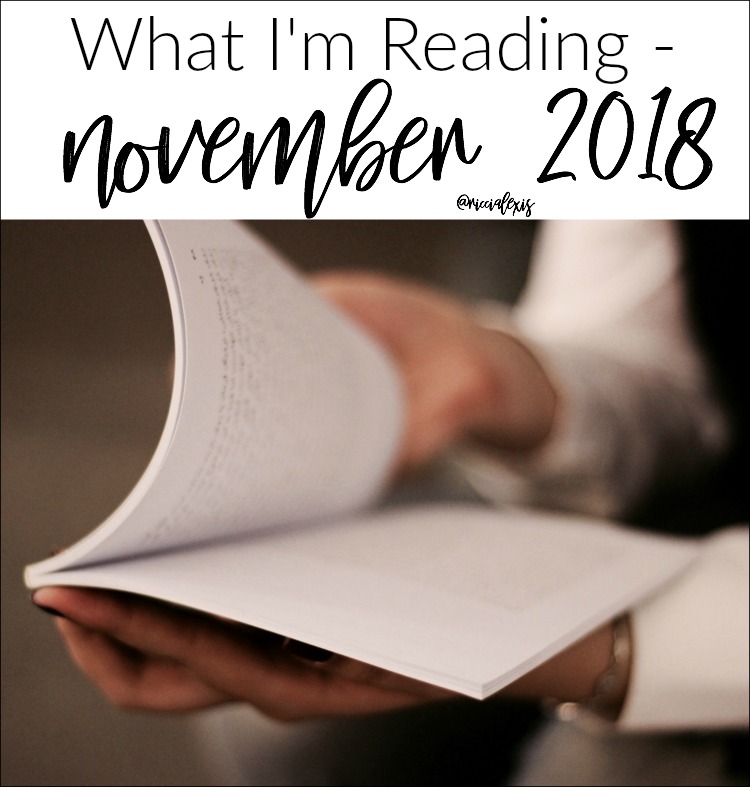