First of all can I just say that jet lag is REAL?? I have never experienced the complete tiredness and need to sleep like I have before this trip. Seattle is two hours ahead of me time zone wise plus working nights and trying to stay awake all day (in Seattle) completely screwed me up. Maybe I’m just getting old?? Either way I have been home for four days now and I’m still riding the struggle bus. Anyway, here is my Seattle trip recap, appropriately named 50 Shades of Seattle. Get it?? 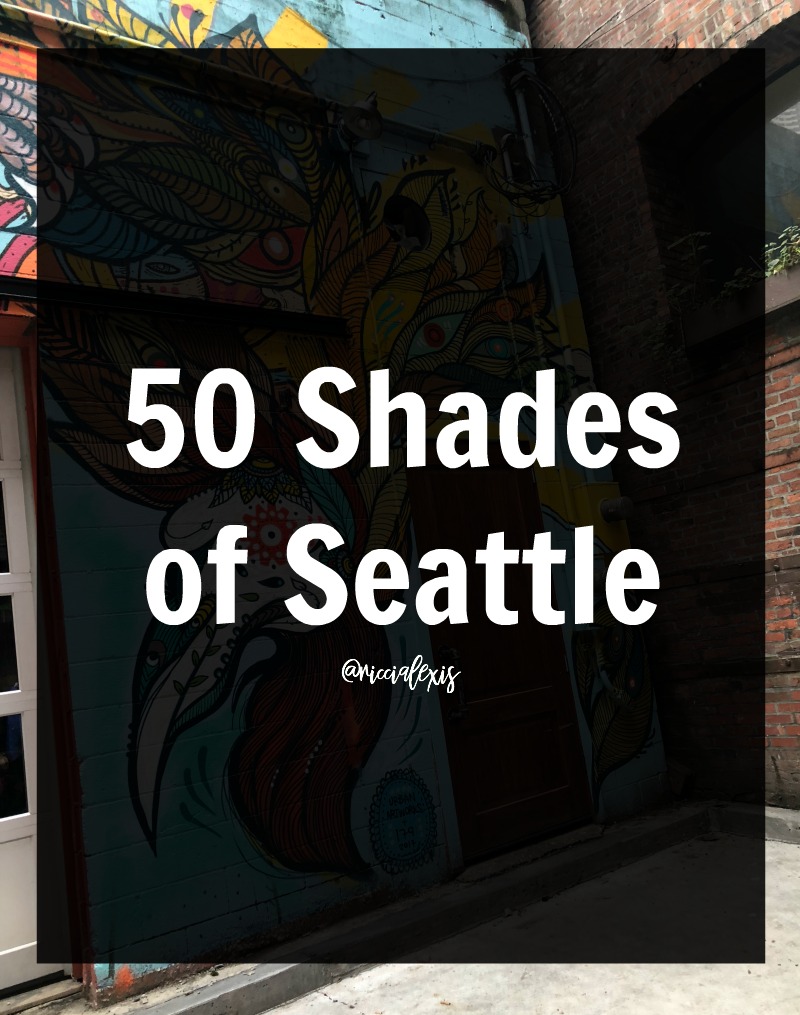 Warning – this post is extremely photo heavy. I tried to only post a few of my favorite pics but I couldn’t because they are all my favorite! Also, if you follow me on Instagram you may have seen on my stories I have been asking for Chicago recs on things to do/eat for a while now and I had my tickets bought and hotel room for the weekend booked but then a huge blizzard came and shut down all flights to and from CHI town so we had to make a last minute trip change and picked Seattle! Seattle is a gorgeous city and has been on my travel bucket list for a long time so switching destinations wasn’t a bad thing at all! Don’t worry CHI I will see you this summer!!

We got to Seattle around noon on Friday and dropped our bags off at our hotel. We stayed at the Thompson Seattle and it was the perfect location for us. It was right by the market and downtown and everything we wanted to see/do while in town for the weekend. Thank you Thompson staff for beings accommodating and friendly!!

After dropping off our bags we ate lunch in Pike Place Market at The Athenian, which you may remember from Sleepless in Seattle. It was a super yummy seafood restaurant and had the most amazing views!! 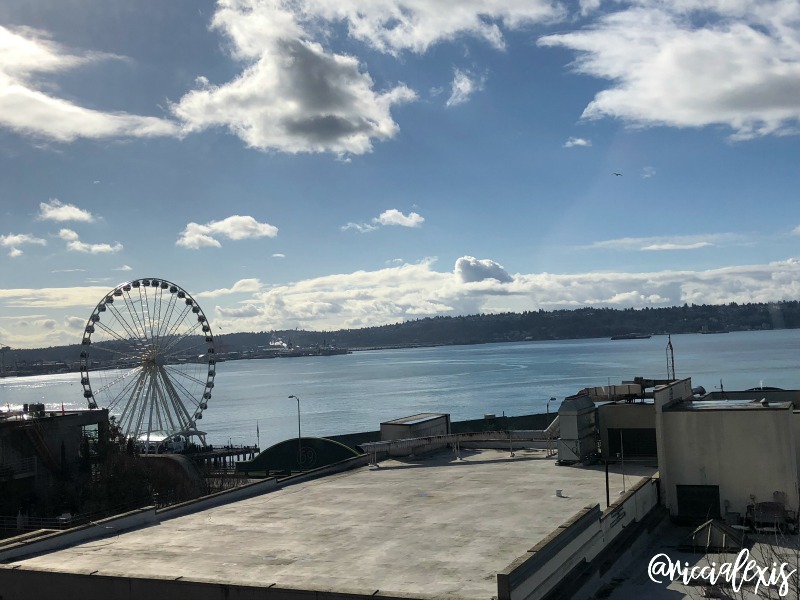 After filling our bellies we walked around the market and stumbled onto the OG Starbucks!! It is located in Pike Place and you know it before you see it because the line to get in is LONG and you can smell the coffee beans from outside. We needed a caffeine break so of course we stopped! Plus let’s be real, the OG Starbucks was on of the main reasons I wanted to go to Seattle, LOL!! 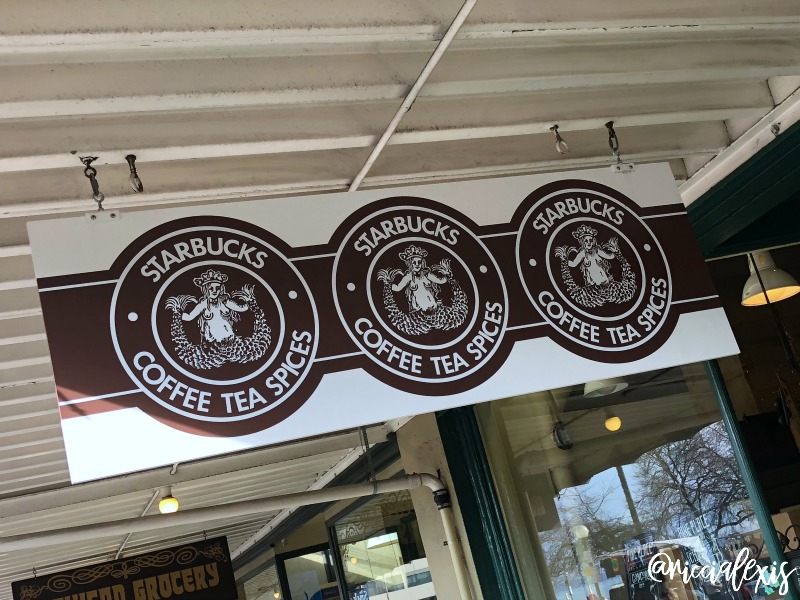 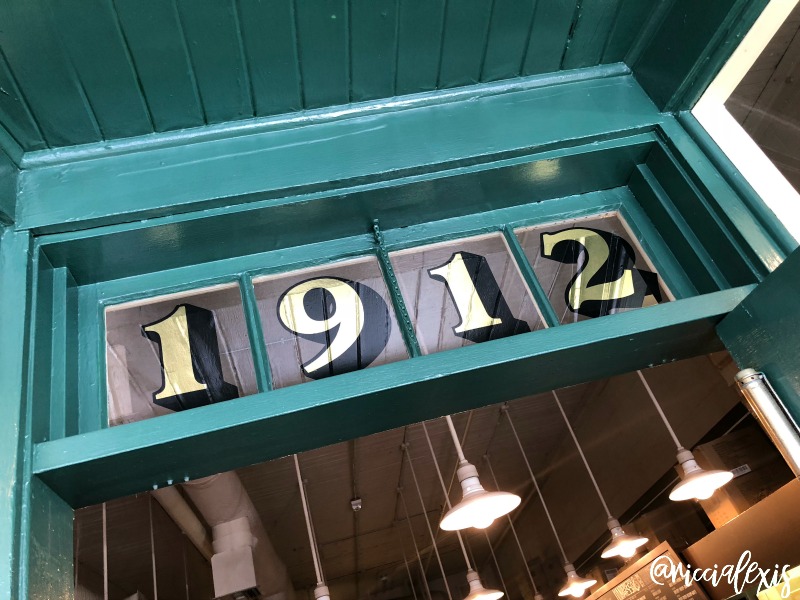 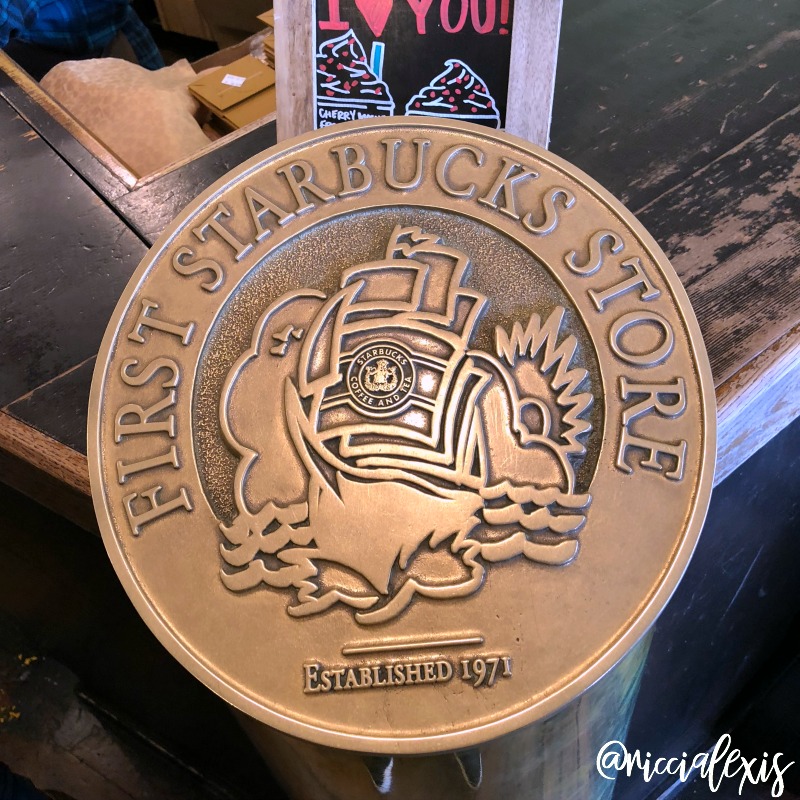 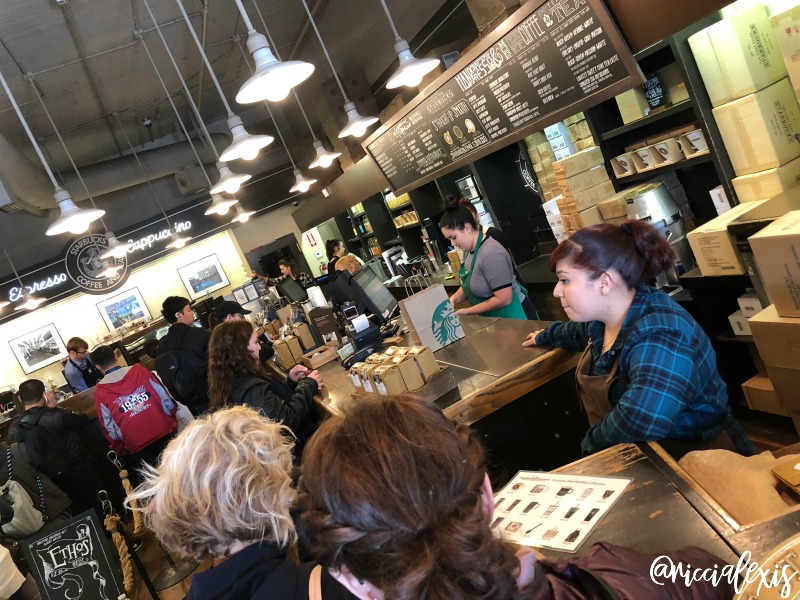 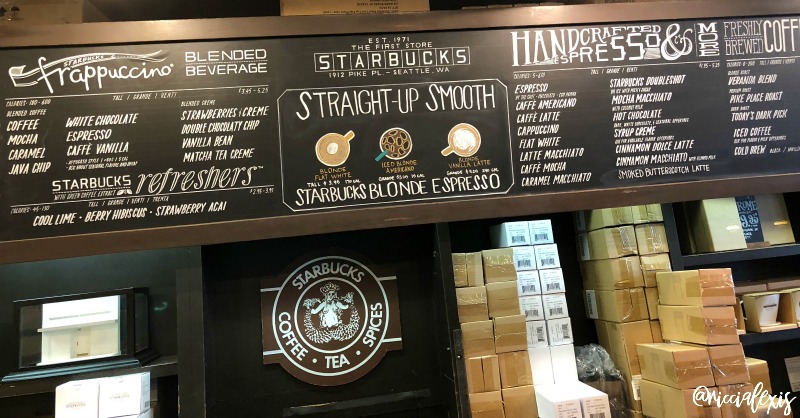 We grabbed drinks, I got my Pike Place You Are Here Collection mug and we were on our way. Fun fact – this location doesn’t have a bathroom for public use so we had to walk down the street to the other (bigger) Starbucks in Pike Place for a bathroom break. I also grabbed the Seattle and Washington state YAH mugs there. THREE mugs in one trip?? JACKPOT BABY!!

We left Pike Place and wandered around downtown while making our way to Pioneer Square. We had tickets for the Seattle Underground tour and took our time getting there. The city is seriously gorgeous and has all of these cute boutiques and shops. 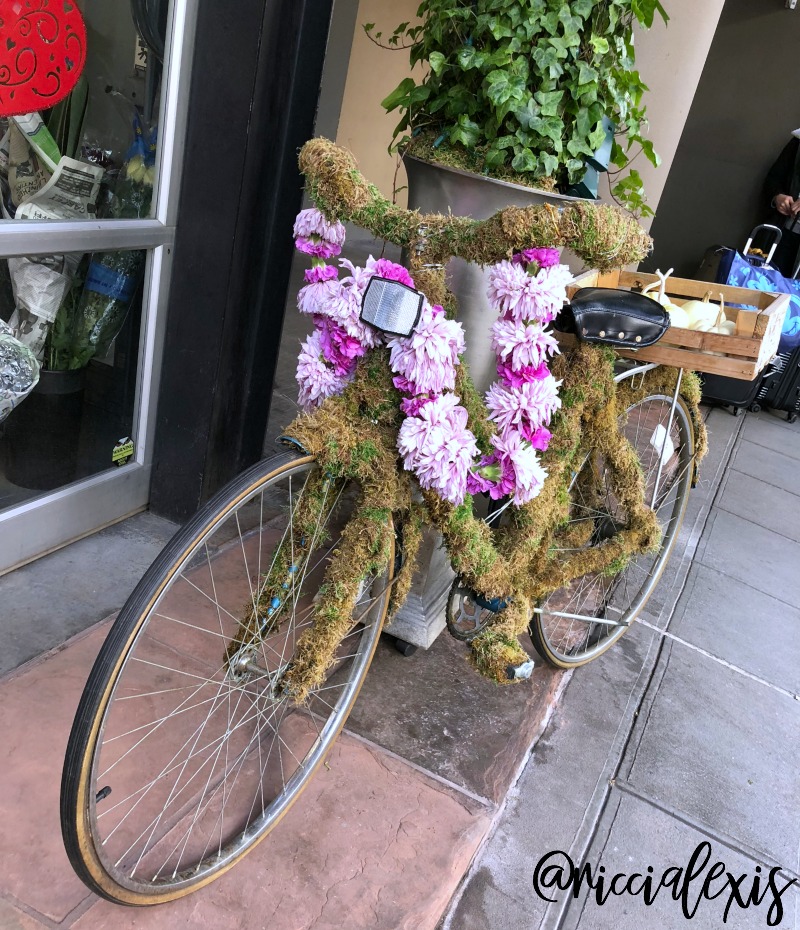 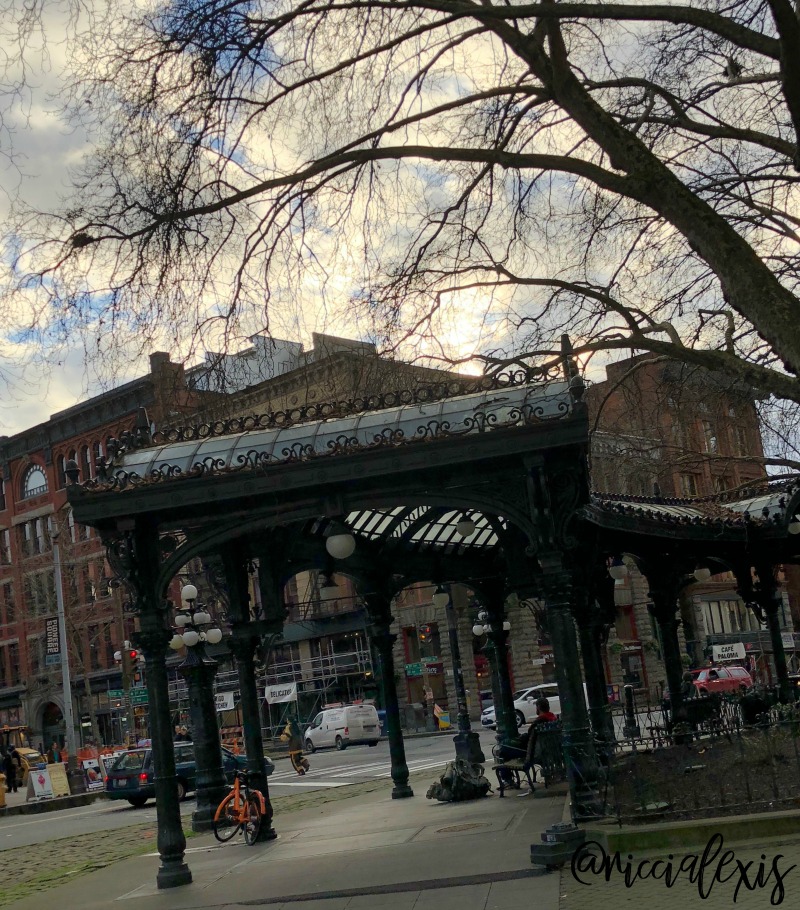 If you ever get the chance to go to Seattle and want to learn a little interesting history about the city I highly suggest the Seattle Underground Tour. It was only $20 and was over an hour long. We got to tour the first level of all of the buildings that were underground. Fun fact – Seattle was originally built of all wooden buildings and there was a bug fire hat burned them all down. After rebuilding the city the first floors (ground level) is still “underground” and were abandoned for a long time so that’s what we got to tour! It was sooooo COOL!! The underground is lit with skylights that you can still see from aboveground but I included a pic of what they look like from underground. 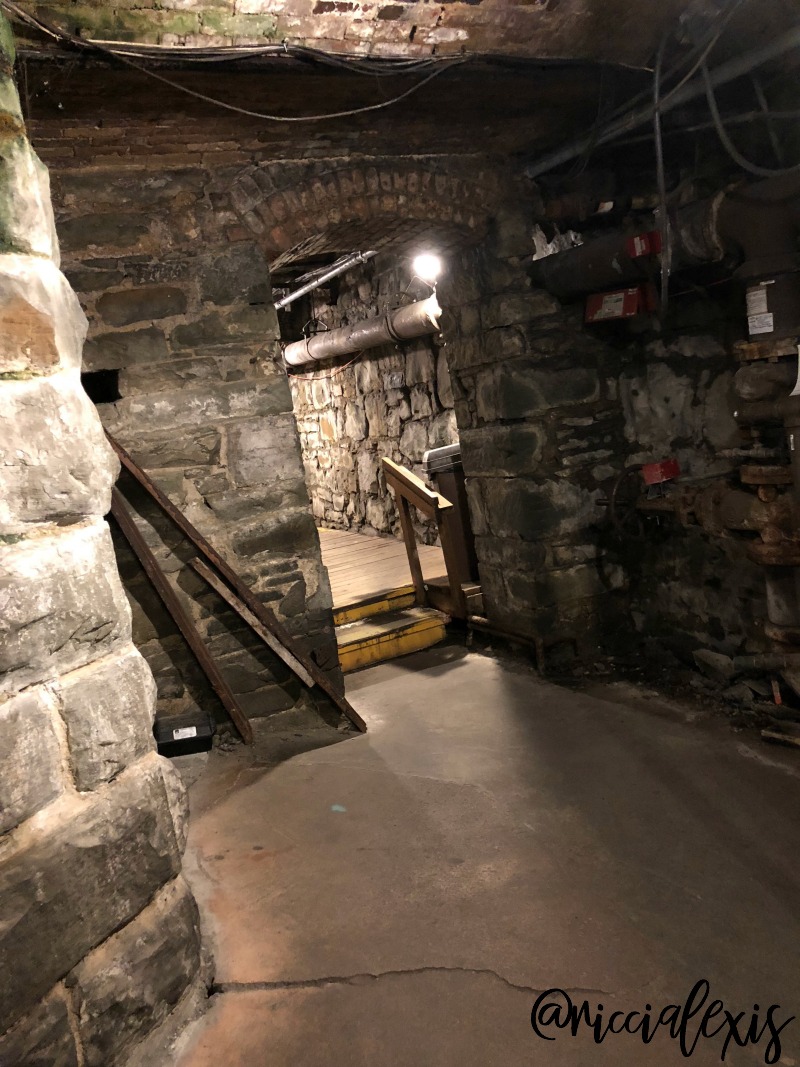 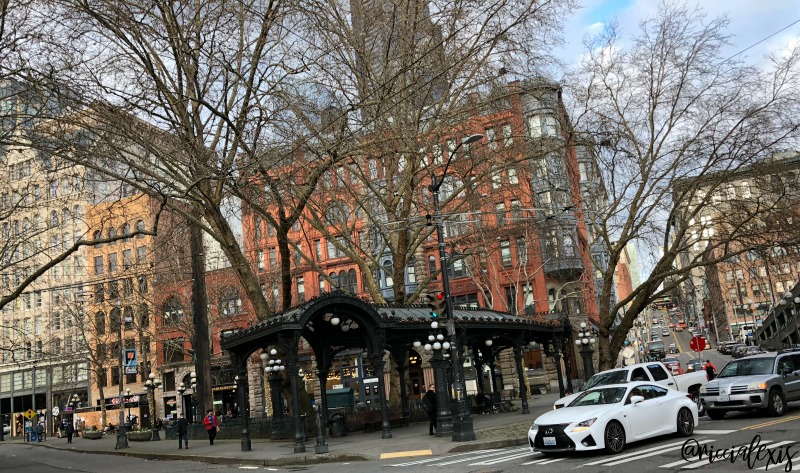 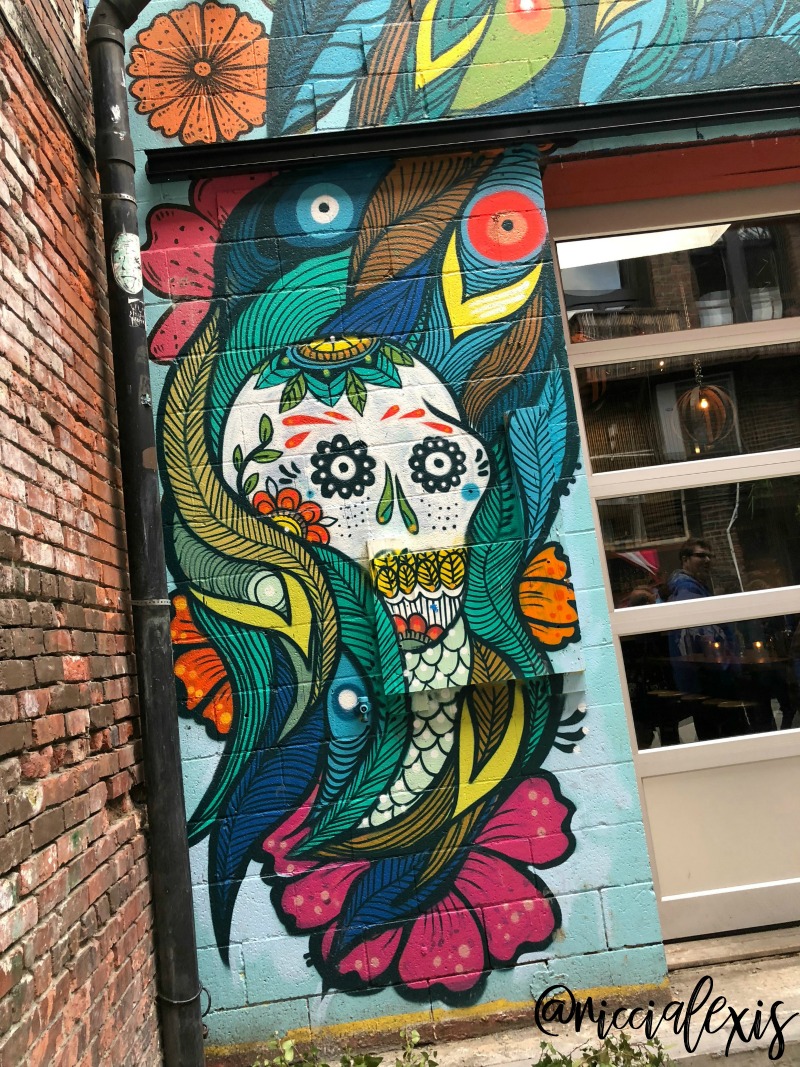 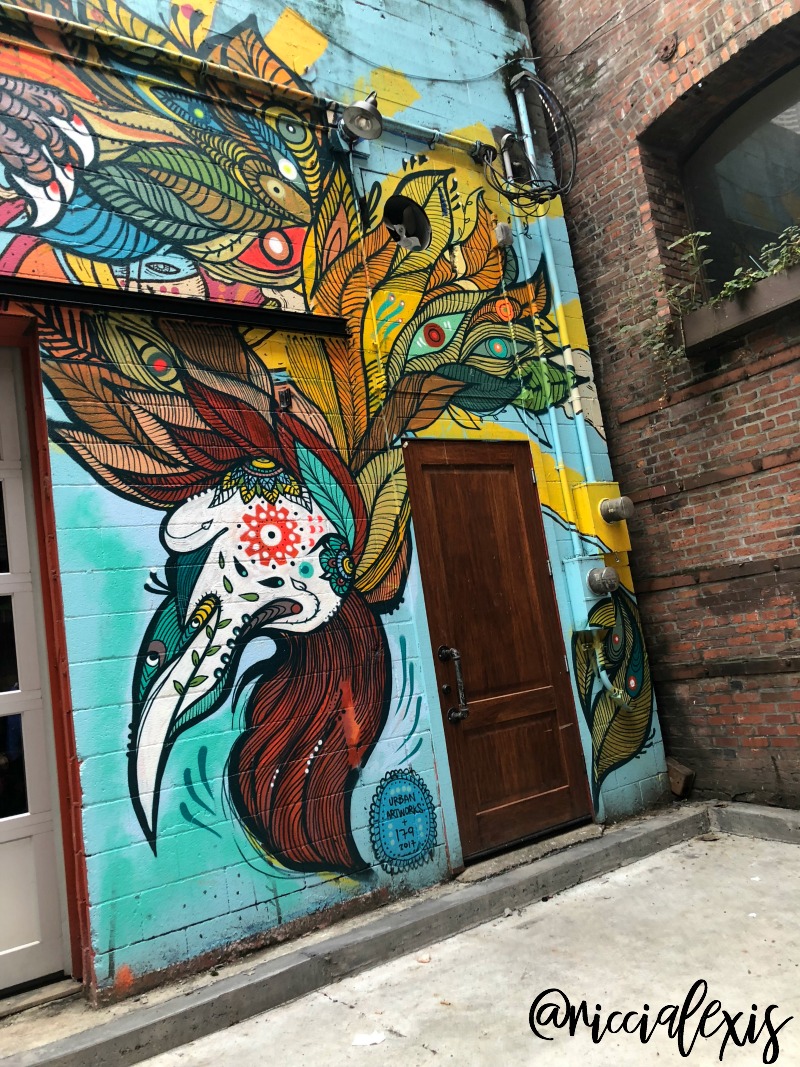 …and wound up in Occidental Square. This is a cute little area which included tables for resent/eating and baggo games for people to play. 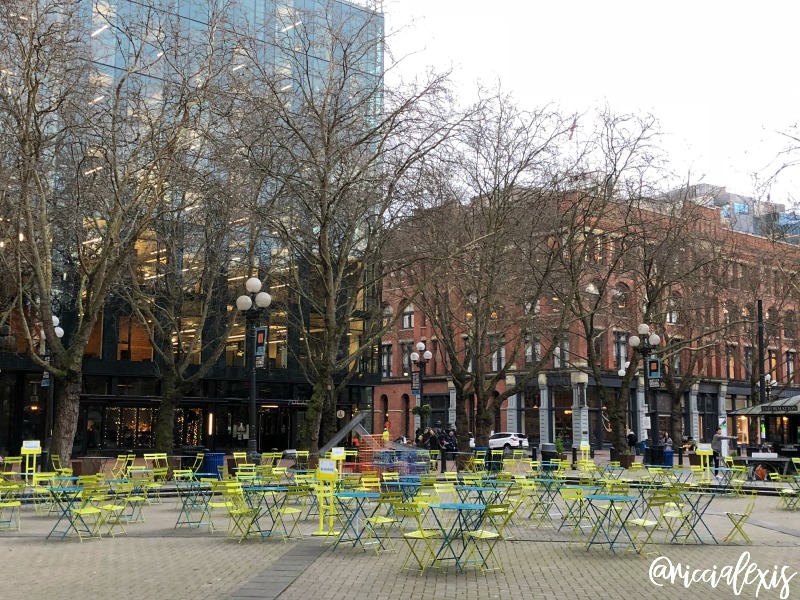 From Occidental Square we Ubered to the Columbia Center so we could visit the Sky Deck Observatory on the 73rd floor of the building. It has these AMAZING 360* views of the city and you can literally see EVERYTHING!!! I think admission was $15 to get on the sky deck? It was worth it!!! 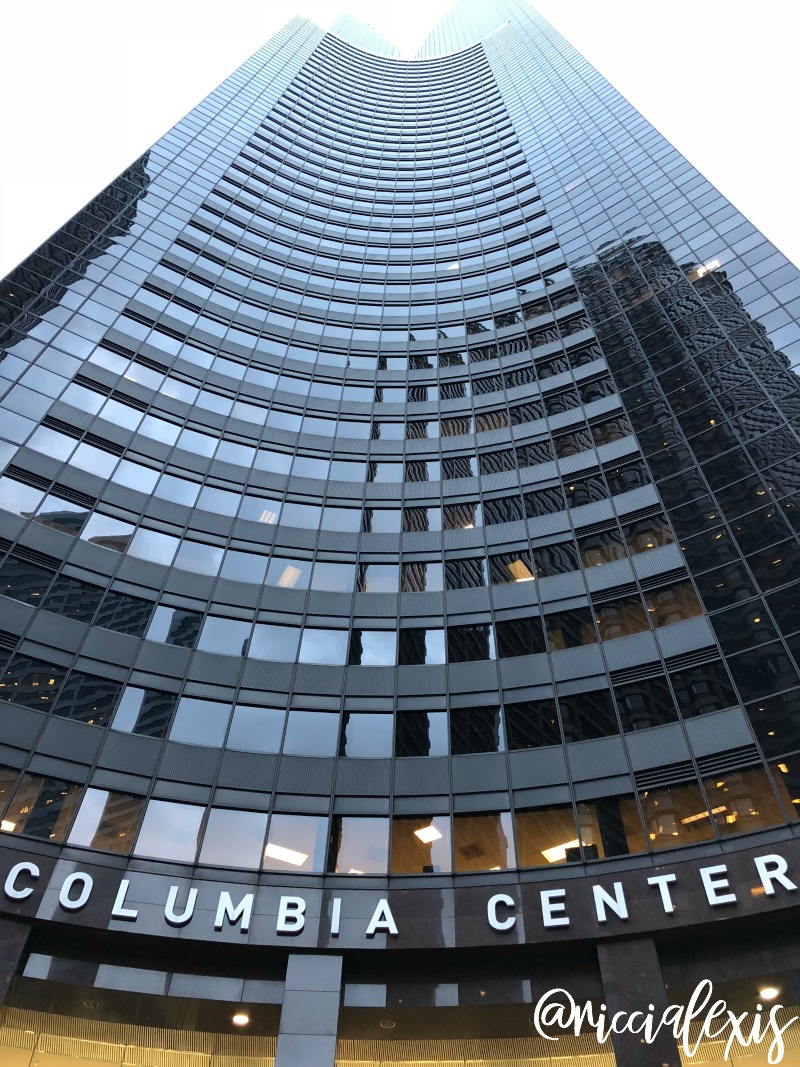 After that we Ubered back to the hotel, ordered pizza (it was National Pizza Day), ate it and then passed out. At that point I had been awake for 30+ hours so there was no shame in my passing out game. LOL!

Saturday morning we were up early and hit up Pike Pace for caffeine aka Starbucks! I mean, when in Seattle…HA! 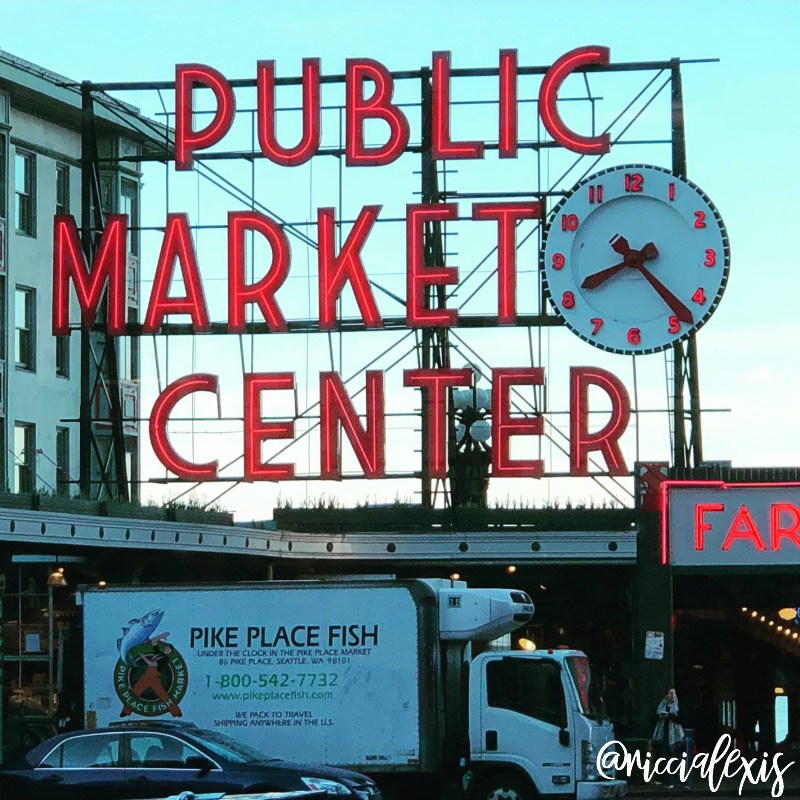 After that we headed downtown for blowouts at Swink Style Bar, the ONLY blowout bar in all of Seattle. I loved my blowout and was ready to take on the day! After that we Ubered to the Space Needle!!! The Space Needle was under construction when we were there but we still got to see most of it and we got some amazing photos of the views from the top. Fun fact – it was sunny and the weather was perfect the entire time we were in Seattle. Weird!! 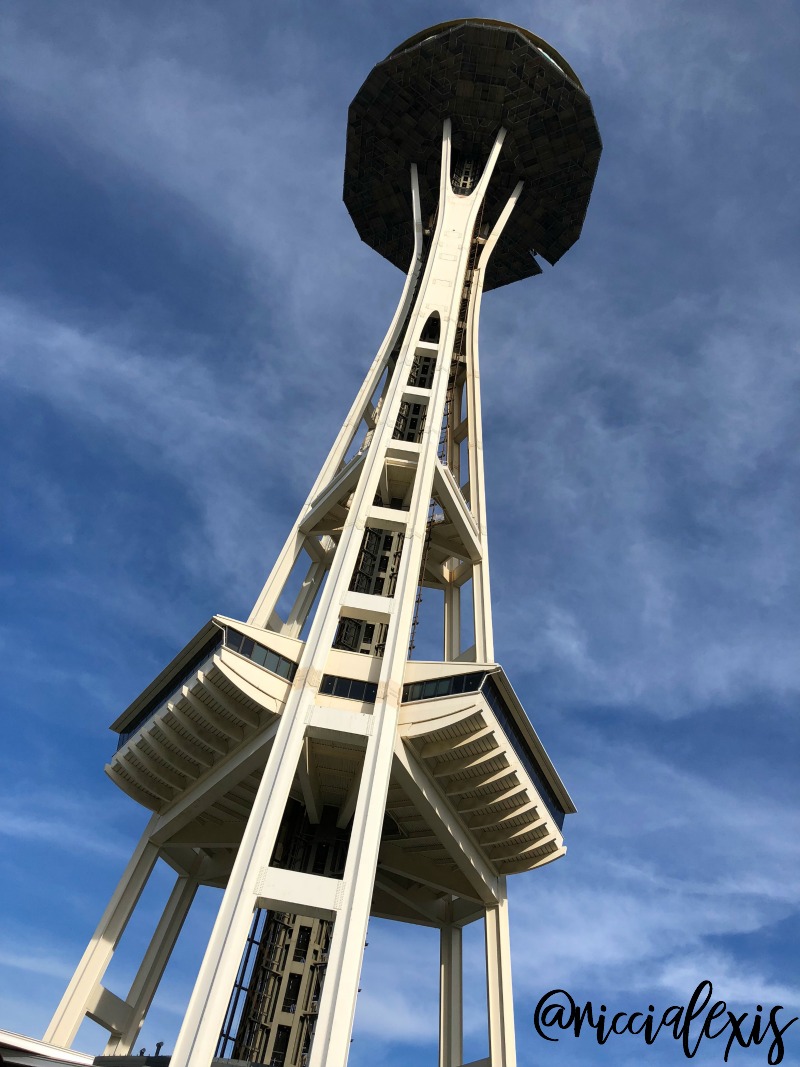 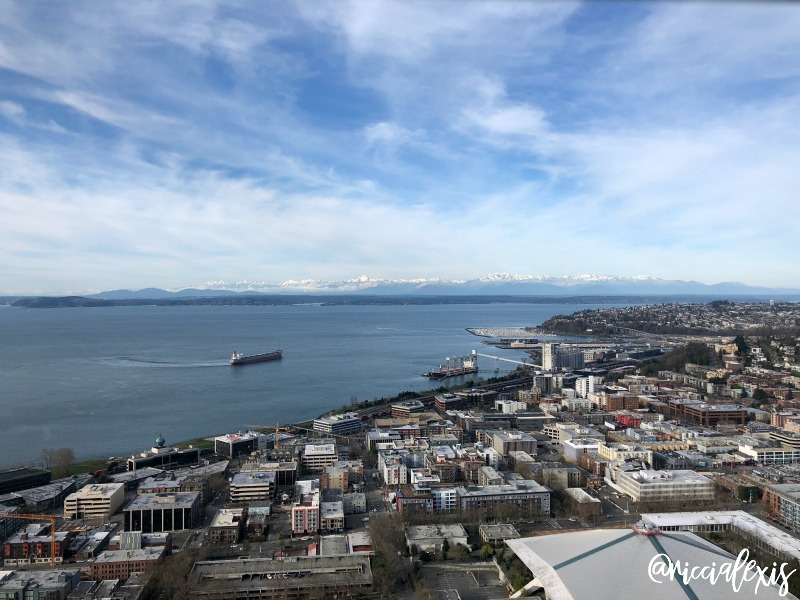 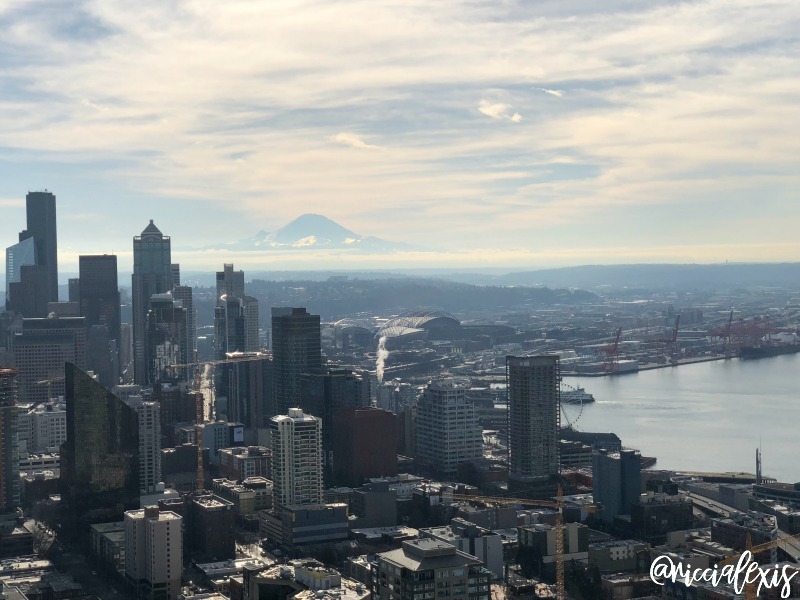 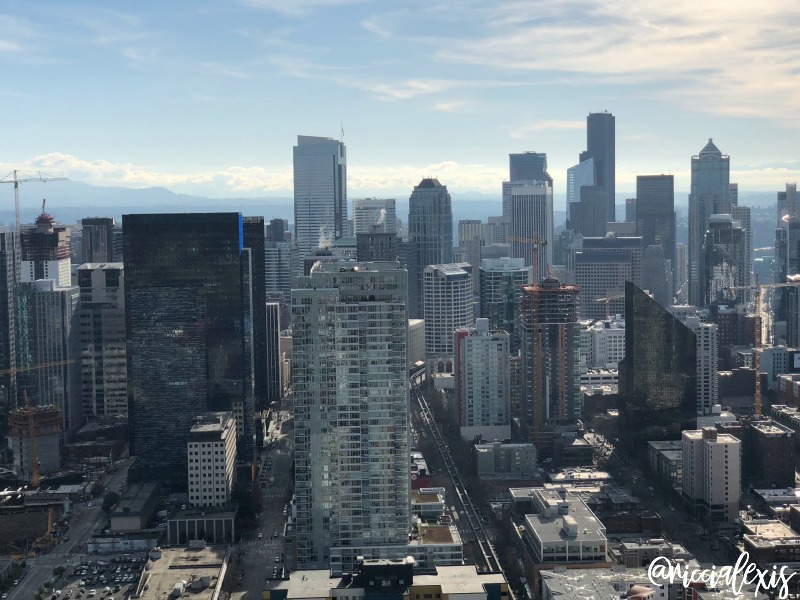 After the Space Needle we headed back downtown to do some shopping!! We shopped until we dropped, found the best Mexican food in Seattle and then headed back to our hotel to get ready for Mr. Grey. That’s right, we saw 50 Shades Freed, the third and final installment of the 50 Shades movies in Seattle, where the movie was filmed and takes place. It was so COOL to recognize places from the movie!! Also, I think this movie was my FAVORITE of the series!!!

The next morning we slept in, grabbed Starbs one last time, found the Gum Wall then headed home! 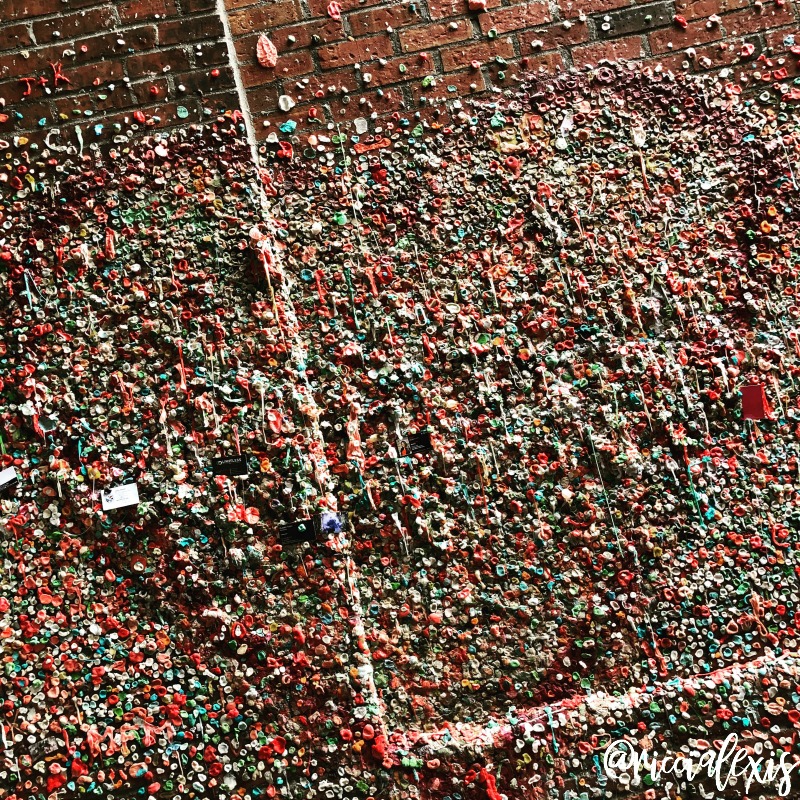 Have you been to Seattle??
What is your favorite thing about Seattle??