Hey hey!! Happy Thursday!! So earlier in the week I posted about my trip to St. Louis for Labor Day weekend and all about my stay at the Four Seasons and in that post I promised you a full post about going to see the Gateway Arch aka “The Arch” and today is that day!! I mentioned in Tuesday’s post that I had been wanting to see the Arch for a long time and had never had the chance so when sweet Rebekah invited me along this past weekend I knew I had to go see it! 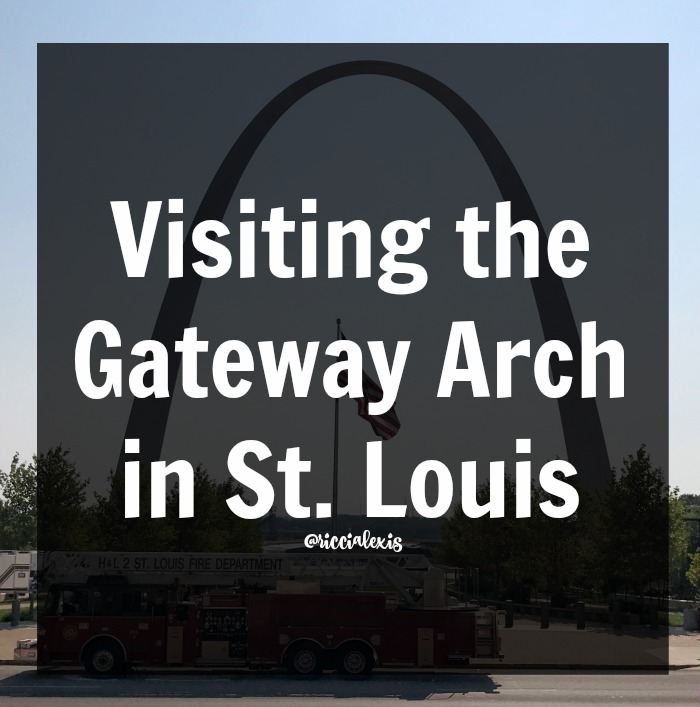 Rebekah had a breakfast and hair appointment scheduled at the Four Seasons Monday morning and I used that time to go explore downtown St. Louis and finally see the Arch up close and personal! Luckily for me the Four Seasons is within walking distance of the Arch and it’s a pretty walk at that!

I had purchased my ticket for the “Journey to the Top” prior to the trip and since I had no idea where I was actually headed I first made my way to the Old St. Louis Courthouse. You can always buy your tickets beforehand but if you don’t then you can always purchase them the day of at the courthouse. However they do sell out quickly so it’s always a good idea to purchase before you go! 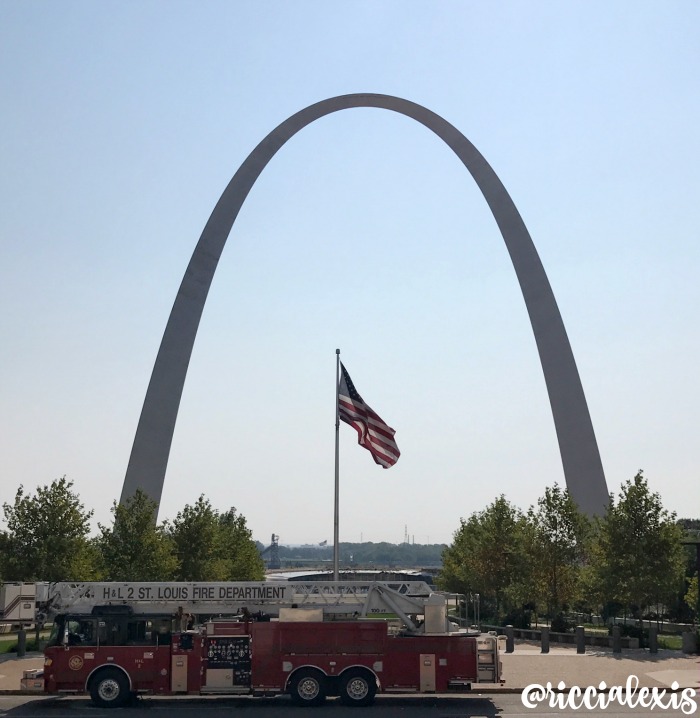 First of all the Old St. Louis Courthouse is conveniently located across from a Starbucks so I stopped there on my way and grabbed some caffeine and a bagel for breakfast. After devouring both I made my way across the street to the courthouse to see where in the world I needed to go!

The Old St. Louis Courthouse is a gorgeous building from the outside and even more pretty on the inside. I have to admit that I felt very patriotic standing there in the rotunda under the American Flag. Gah…I LOVE my country!! 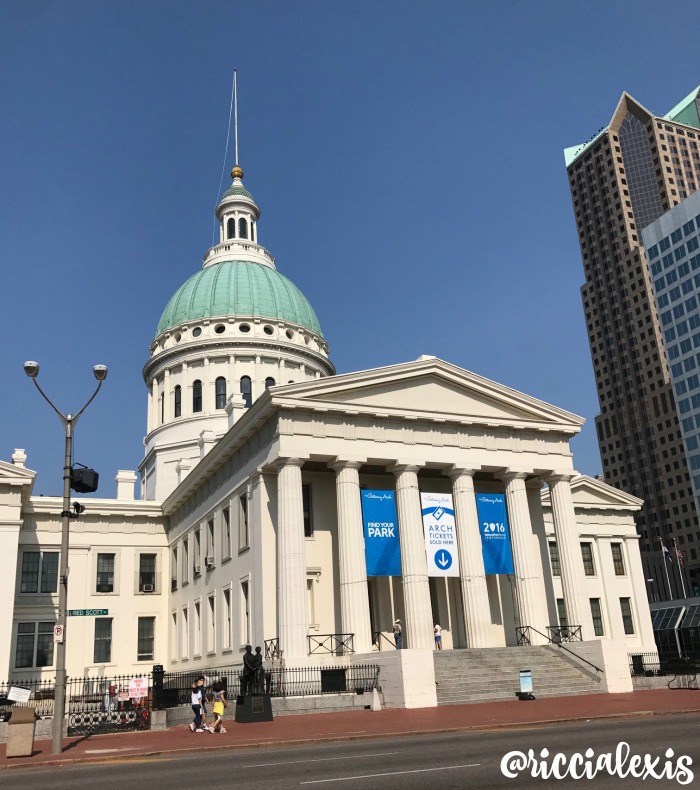 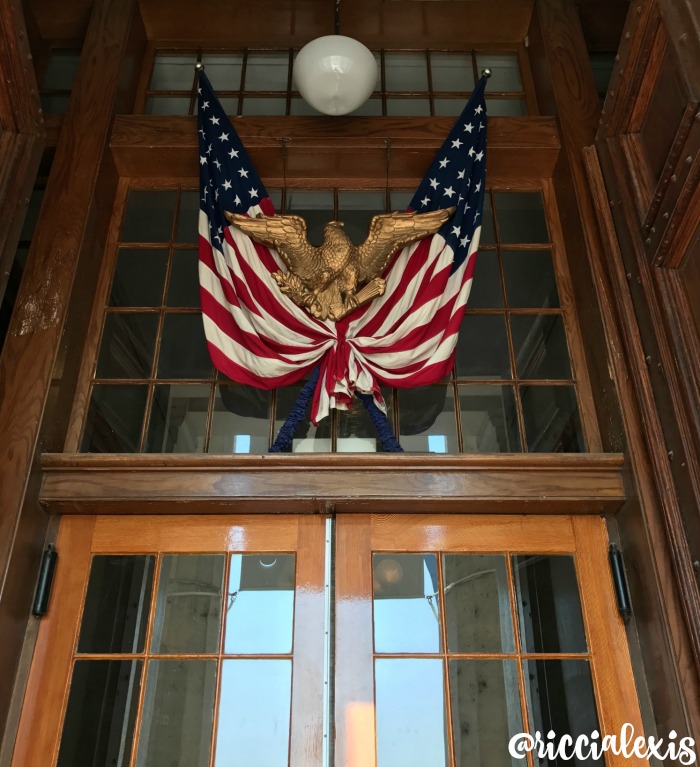 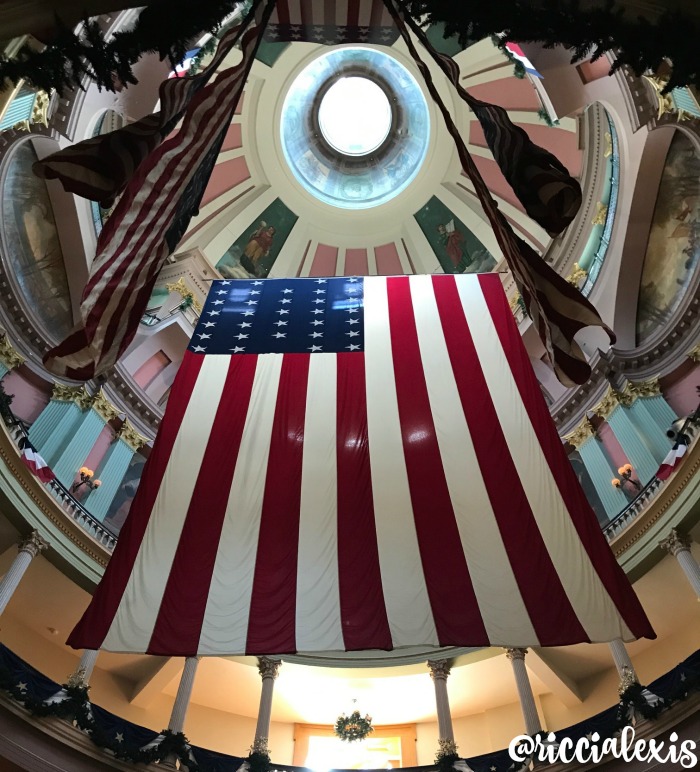 After talking to a really nice lady, I gathered my map (just call me Dora the Explorer) and followed the signs to the Arch! 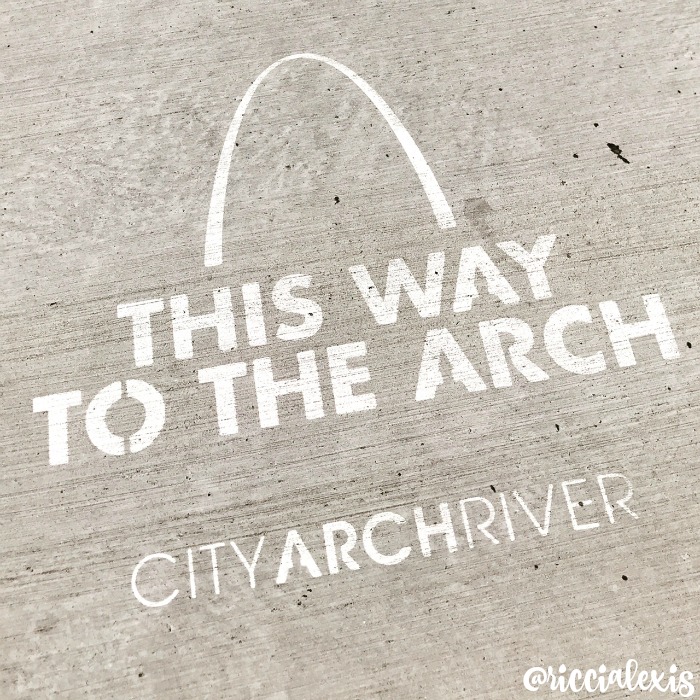 I mean if I had only looked at the ground maybe I wouldn’t have had to ask for directions but then I wouldn’t have seen the inside of that gorgeous courthouse. These markings on the sidewalk also sort of reminded me of the Freedom Trail markers all over Boston!!

So after following the markers I made it to the Arch!! And let me tell you something…seeing it from a distance and seeing it close up and personal are two completely separate feelings. Actually being close enough to touch it and seeing exactly how tall that dang thing is is awe inspiring. 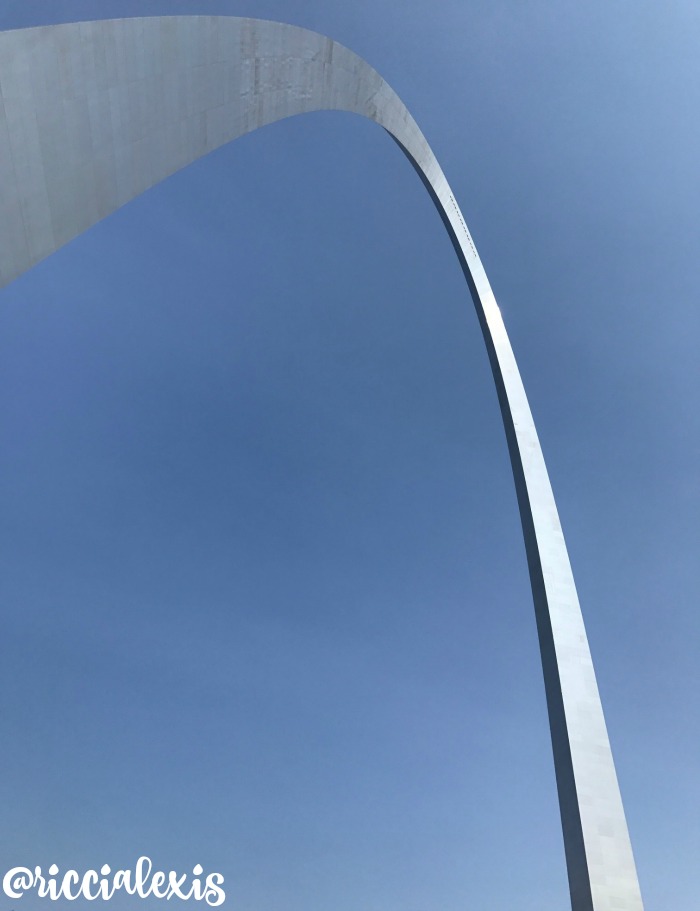 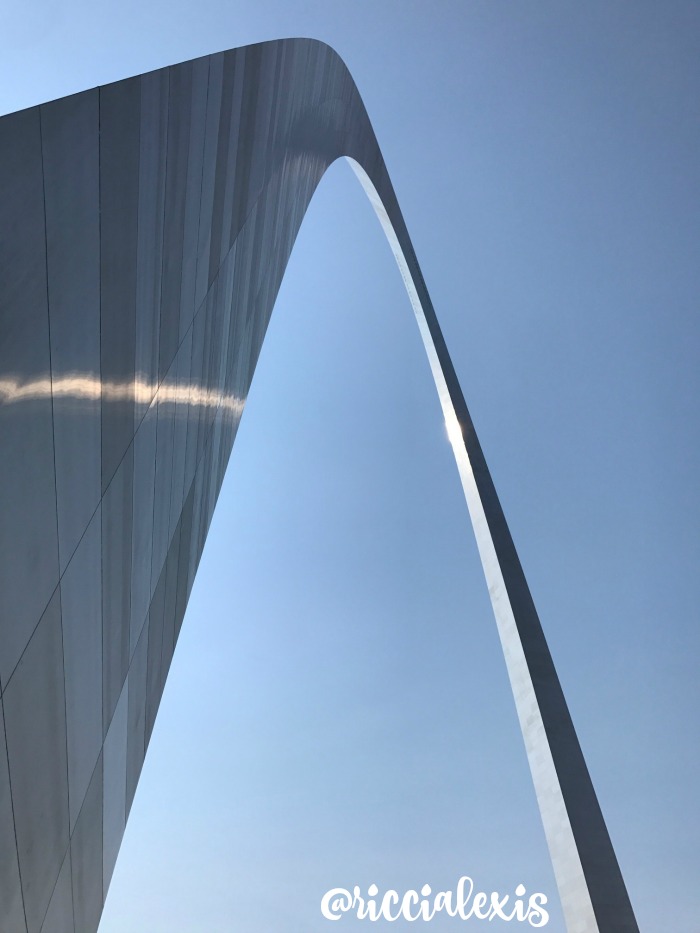 After gawking at the Arch for a little bit the heat got the best of me and I made my way inside/under the Arch to get in line to take my “journey to the top”. I didn’t get any photos of the inside because there were soooo many people around and that just felt a little awkward but let me tell you. If you are going to the top of the Arch get ready to stand around a lot and get into a lot of lines. If you are claustrophobic at all or scared of heights I would also think twice about making this trip again.

The little tram cars you take to the top only fit five people each and even though I am only 5’9″ I had to crouch down in my “seat” because my head hit the top. The journey to the top takes about 4 minutes and it actually passes pretty quickly. It was very creaky sounding and there is a tiny window so you can see the inner workings of the inside of the Arch and that was a little scary.

But we finally made it to the top and  crawled out of our cars and stretched!! It felt soooo good to be able to move around again! HA!

There are windows on both sides of the top that you can take photos from and here are some of the pics I took from the very top of the Arch! 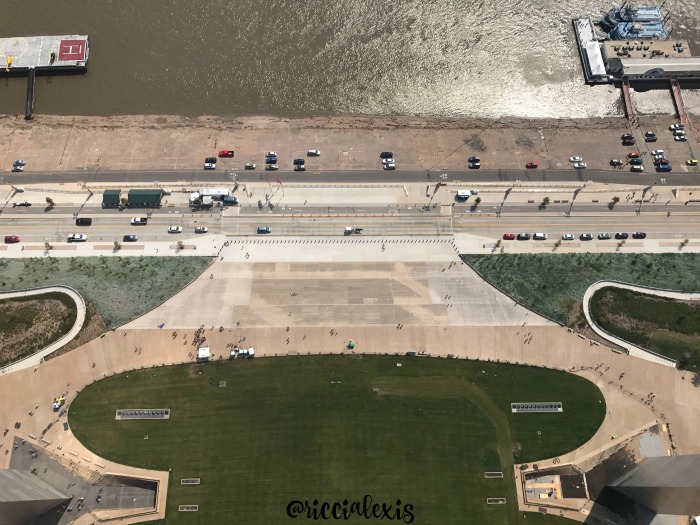 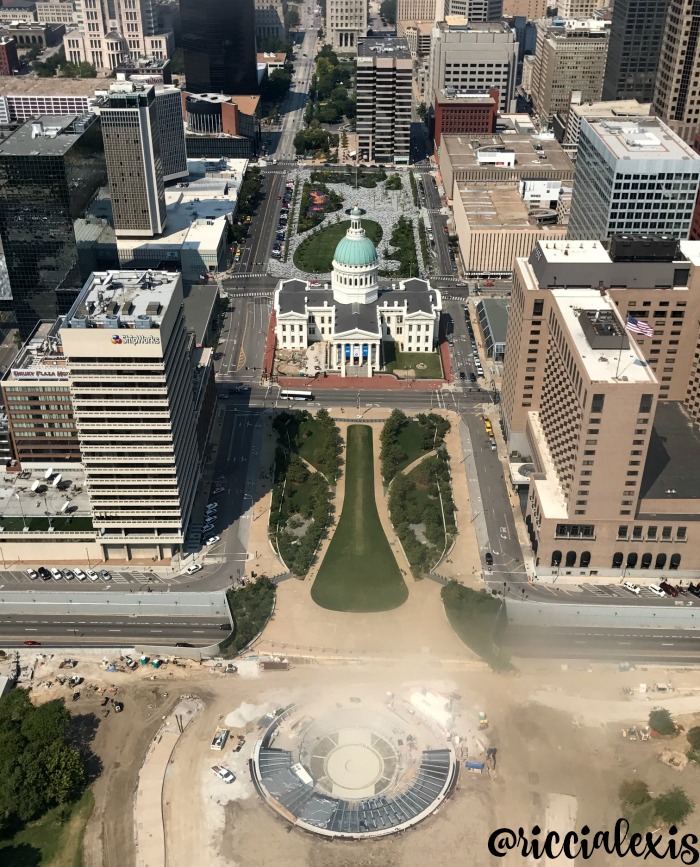 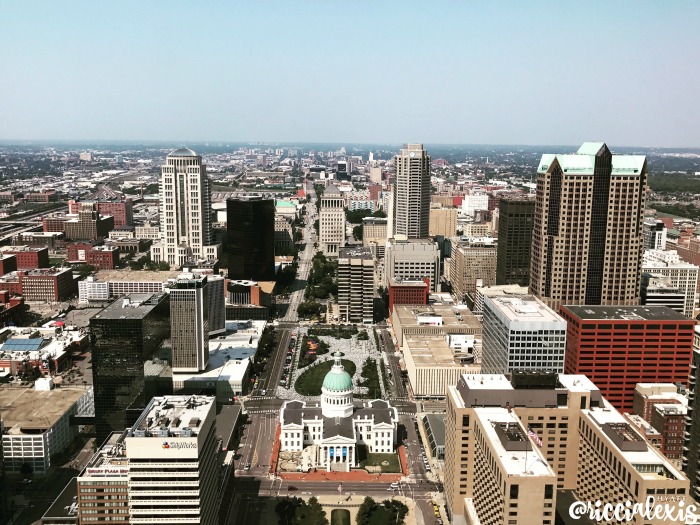 You can stay in the top of the Arch as long as you want but after a few minutes I was finished and headed back down. The trip down only takes about 3 minutes but was still as crouched and creaky as the trip up! LOL!!

Here are some fun facts about the Gateway Arch in St. Louis:

Have you been to the Gateway Arch in St. Louis??