Today I wanted to share one of those lists with you…my top 10 US Cities I want to visit!! I have a goal to see every one of the 50 states and I have made pretty good progress but there are a few cities in states I want to visit that I never have and as you can see I have a lot of states left, but I think I’m about halfway there?? 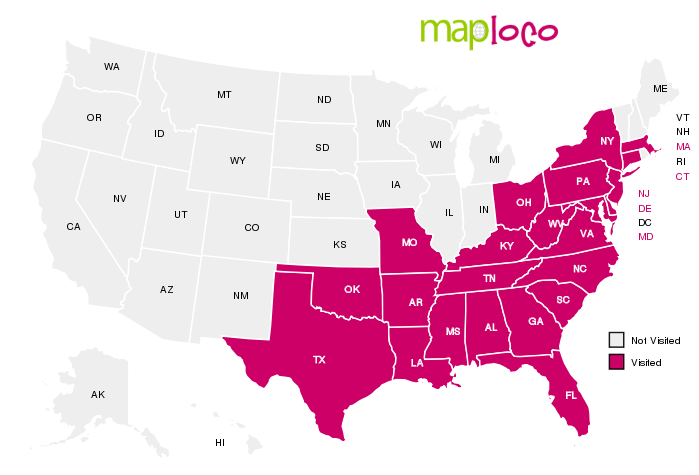 This list is on no particular order, I just put them on here as I thought of them. I hope you enjoy and leaner a little bit more about me…

New Orleans. My family lives about 2 miles from the Louisiana state line so I have been to Louisiana about a million times but I have never been to the southern part of the state! I have always wanted to go to New Orleans but I think will be more of a fall trip?? I want to walk on Bourbon Street, eat beignets and drink cafe’ au lait at Café du Monde, I want to ride on a streetcar, and I want to visit a haunted cemetery.

Charleston. I have been obsessed with Charleston for about as long as I can remember. I have read a lot of books that were based there and I am almost ashamed to admit that I love the show Southern Charm. I think it is a city rich in southern history and fabulous architecture and I want to go soooo bad!!

Savannah. I have wanted to go to Savannah for as long as I can remember. It is also a city rich in southern history and charm and I heard it was haunted!! It is also close to Tybee Island, another city I want to go to!! I would love to go and eat at Lady and Sons and walk around the gorgeous parks. One day…

Chicago. I have been looking at taking a Chicago trip for a while now…it is actually not too far away by train and I have been dying to take a train trip!! I think I want to do Chicago in the summer and I want to see a show while I am there. I also want to see a Cubs game at Wrigley Field and see the Skydeck! I say see the sky deck because I think I would be too scared to actually step on it. LOL!

St. Louis. St. Louis actually isn’t too far from me!! I want to go see the arch and tour the Budweiser Brewery!! I would also love to go to the City Museum because I have heard it is amazing!!

Maui. I want to go to the beach!!! This would definitely be a winter destination since that is when I most need the beach and really I would love to go to any of the Hawaiian islands but I have always heard amazing things about Maui!

Orlando. I have been to Florida multiple times but have never been to Disney World. I am probably the biggest Disney fan who has never been to any Disney park. Ugh. I want to go sooooo bad!! One day! And let’s be real, I will probably go to Universal while I am in town and see Harry Potter too.

Seattle. I am about to go complete white girl on you and tell you one of the main reasons I want to go to Seattle is to go to Pike Place and see the very first Starbucks. I also want to see the Space Needle and let my inner Grey’s Anatomy fan girl nerd out. Just saying…

Los Angeles. LA…where dreams are made. Or something like that. I really just want to go and see movie stars!! HA!! But really though…

How many US states have you been to??
What US cities are on your top 10 list to see??