It’s kind of hard to get going on this Monday morning when you’re coming down off that royal wedding high. Am I right? LOL!! Just like the last royal wedding, there were soooo many things I absolutely loved about it but most of all how steeped in tradition it was. I love how everything from the flowers in the bridal bouquet to the titles given to the newly wedded couple to the uniforms worn by the princes and the declaration of marriage presented by the reigning monarch all dates back hundred of years. It’s so interesting to research and learn about!! Is my inner nerd showing yet? HA!

This wedding was also unique in that it incorporated some new things that were important to the bride in it too. Especially since she’s not a British citizen…yet. I love that she had a reverend preach at the wedding and that he used the words of Dr. Martin Luther King in his sermon. I also loved that she had a black choir perform in addition to the usual choir. Thank you Meghan for making this Royal Wedding truly your own. 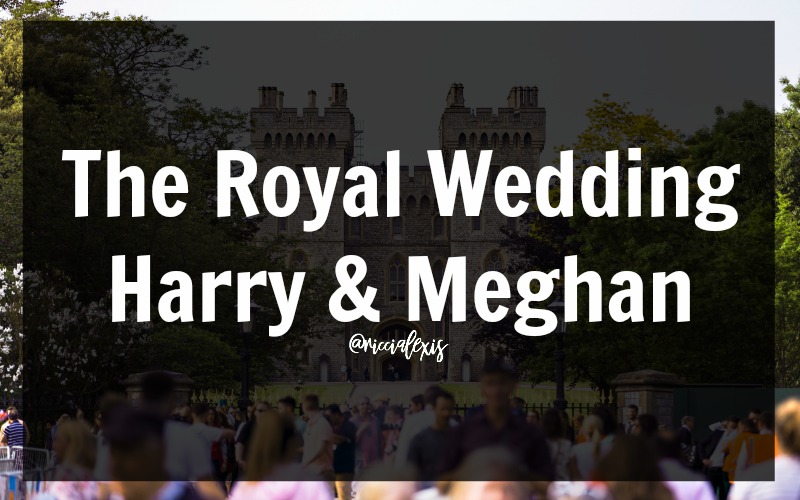 And now, on to my favorite part, the photos!! I took all of these as screenshots across various media outlets and I claim zero ownership to them. I kind of hate that I even have to say that, has blogging really come to this?? Yes.

First up, the announcement of the titles. It has long been suspected that the Queen would give Prince Harry the title Duke of Sussex because it is traditionally reserved for the second son of the current Prince of Wales, which Harry most certainly is. The interesting part of this particular title is that while it has been used twice before never has there been a legitimate Duchess of Sussex, so Meghan gets the honor of going down in history as the first legit Duchess of Sussex. What a lucky girl! 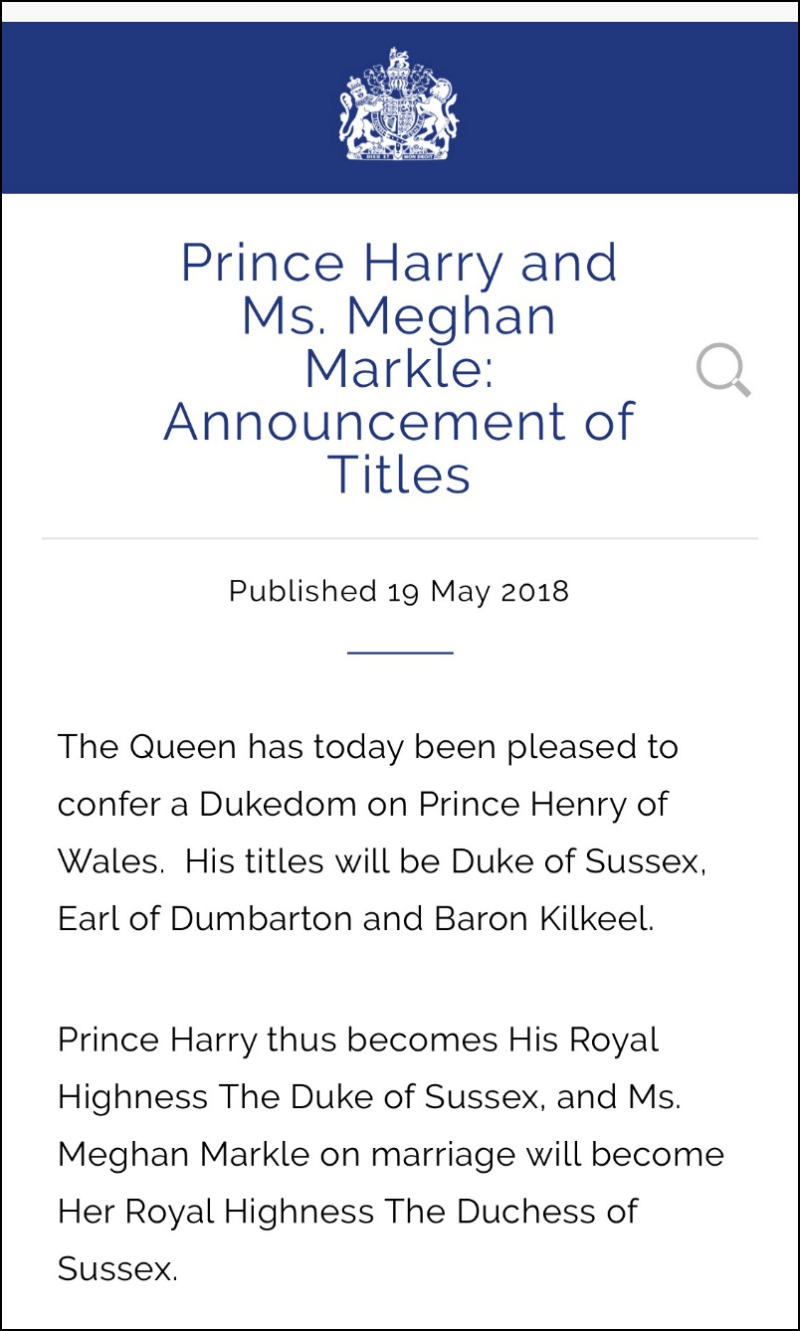 Prince Harry married Meghan Markle at St. George’s Chapel at Windsor Castle and y’all that place looks like a dream come true. All of the greenery and flowers that were put up were just gorgeous and if you watched the footage of the wedding then you probably saw that swoon-worthy black and white floor. Y’all know I’m a sucker for anything black and white, LOL! 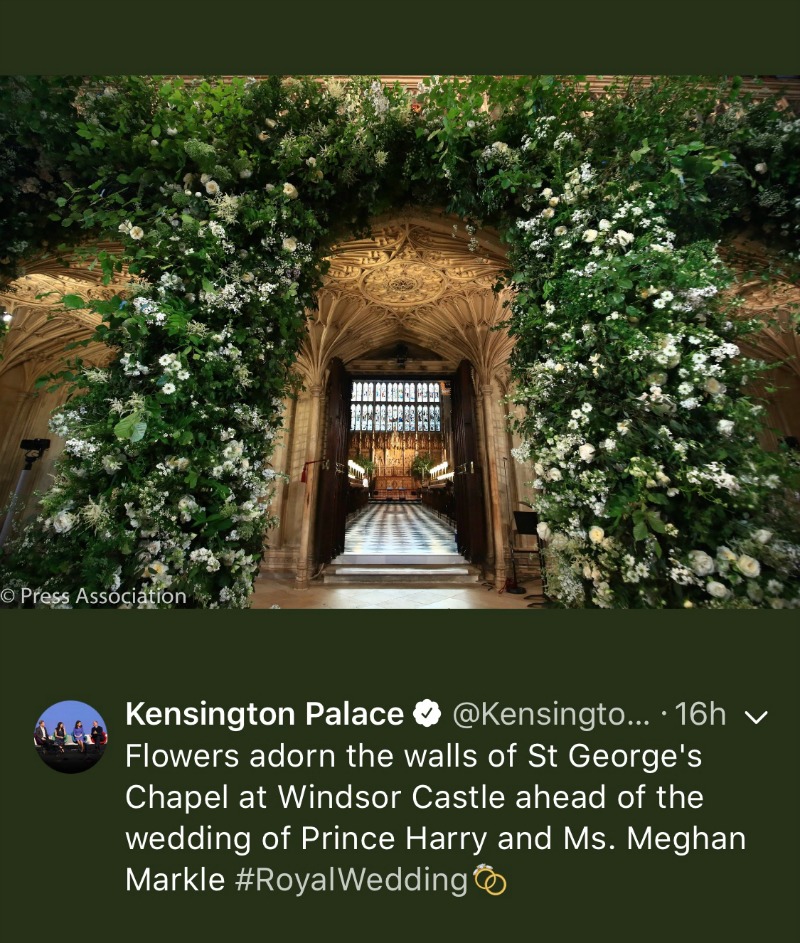 Of course Prince Harry asked Prince William to be his best man! I thought they looked so handsome!! But who wouldn’t think a Prince was handsome…LOL!! 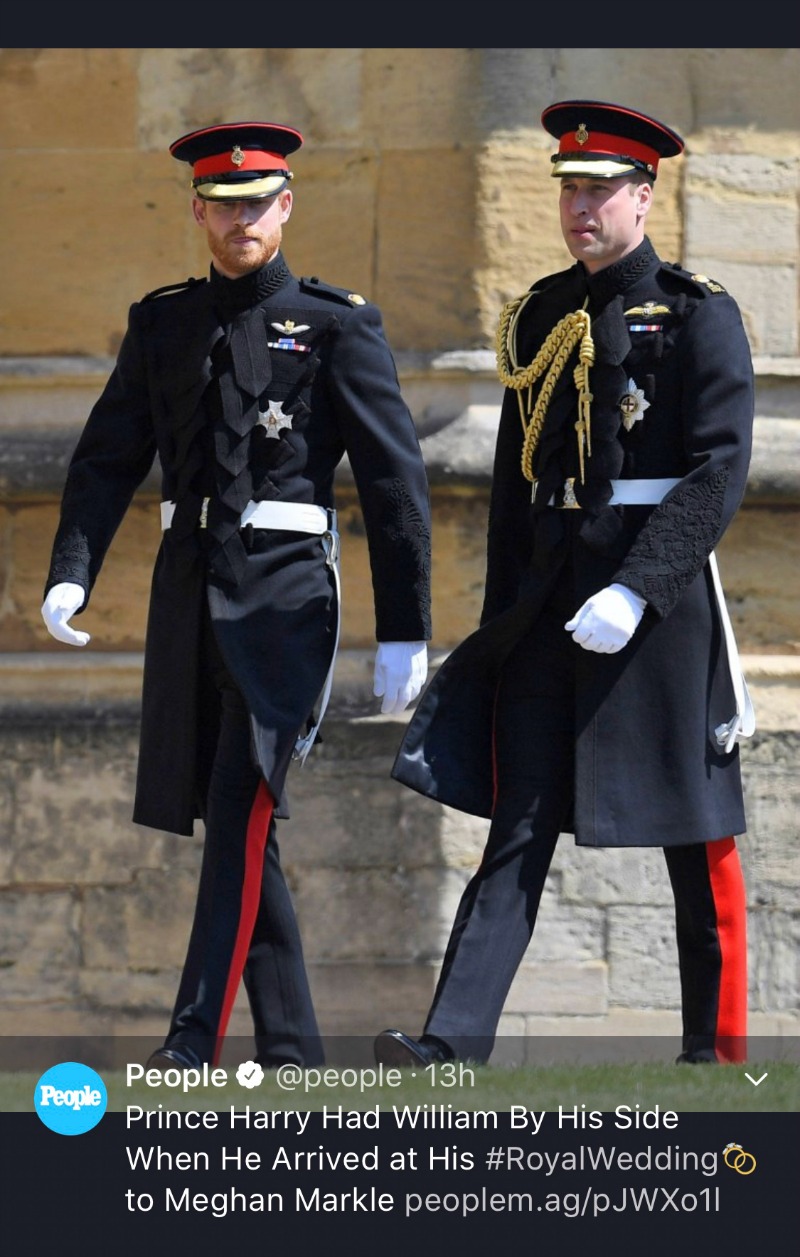 And then there was the dress. Oh my that dress!! I will be the first to say that it wasn’t what I was expecting but I think it was that much better because it’s not what was expected of her. The dress was designed by Clare Waight Royal  of Givenchy and it was simply stunning. I think I expected more frills or lace or beading or just something but I think the simpleness of the dress absolutely made the day. Plus that veil, that veil is goals. 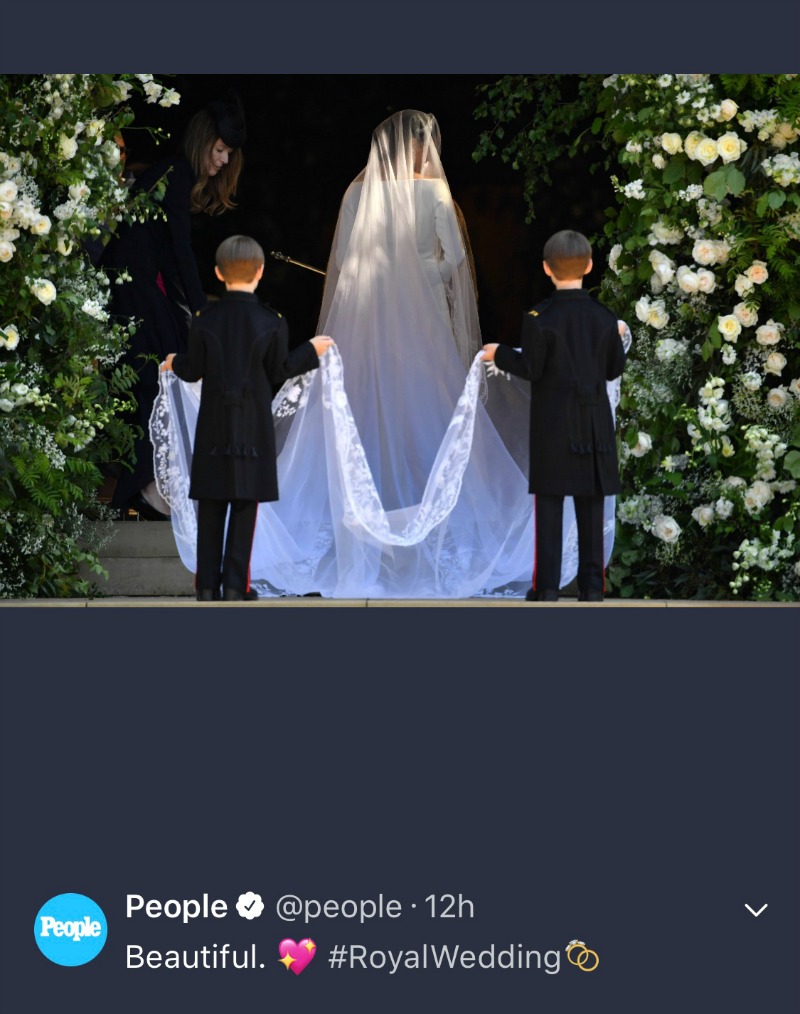 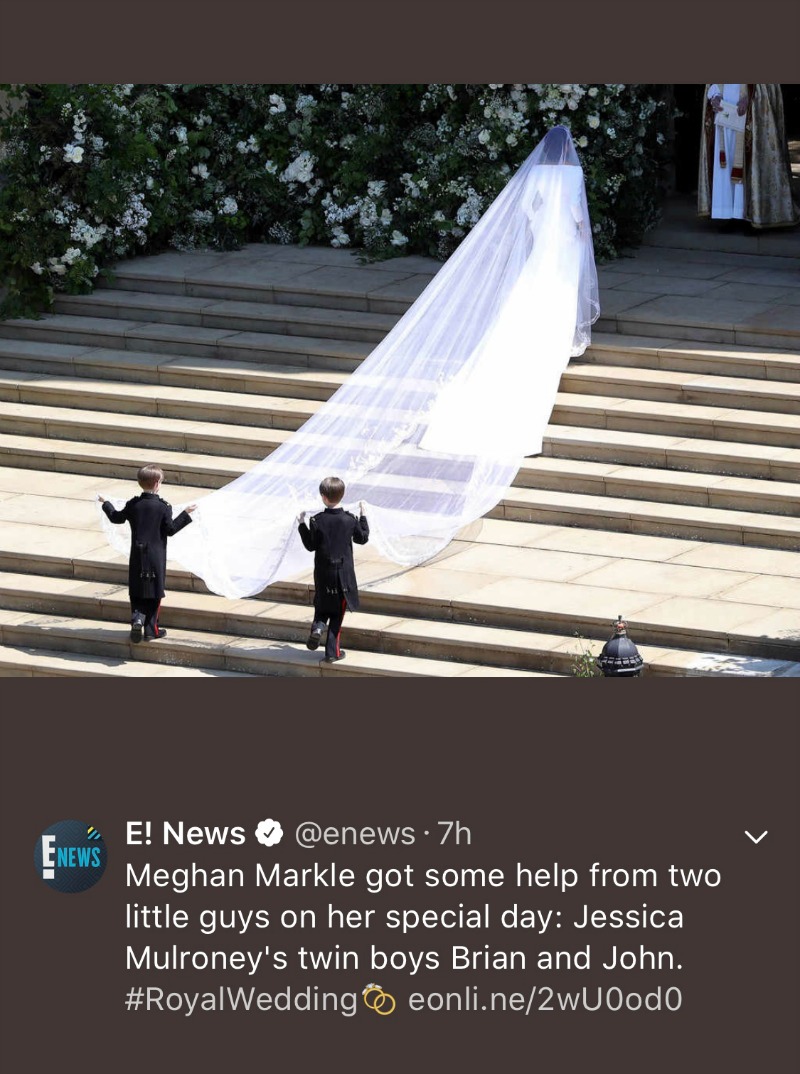 The ceremony was just beautiful and like I mentioned earlier I love that Meghan put her own spin on it. 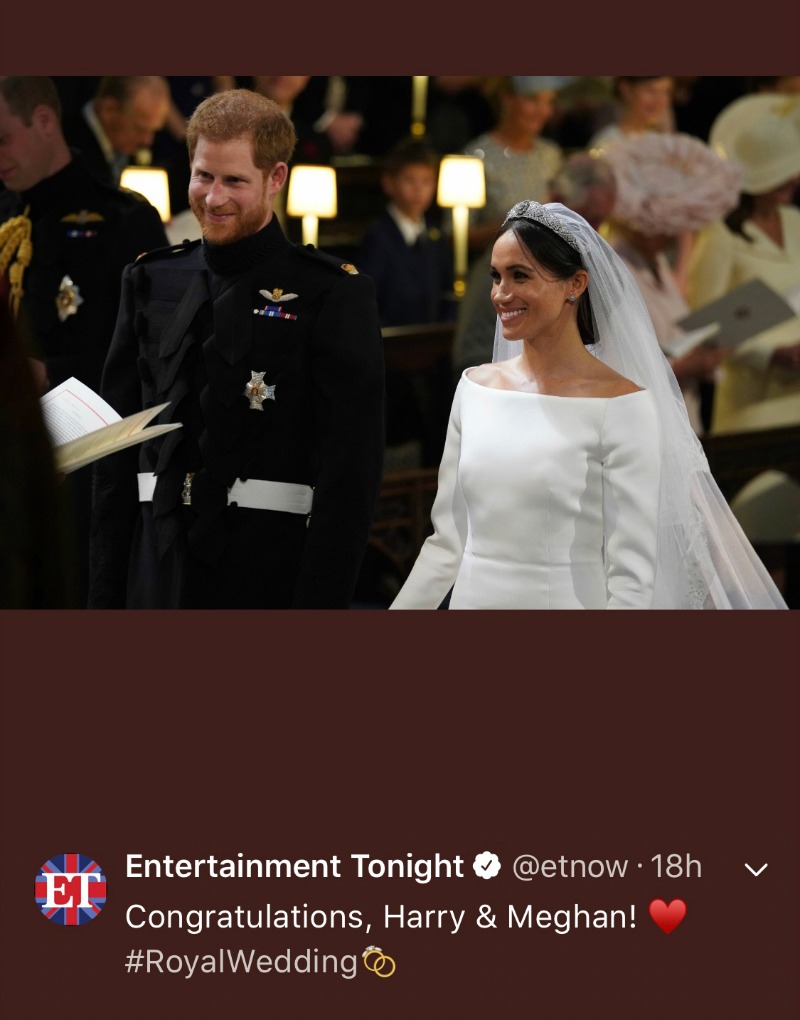 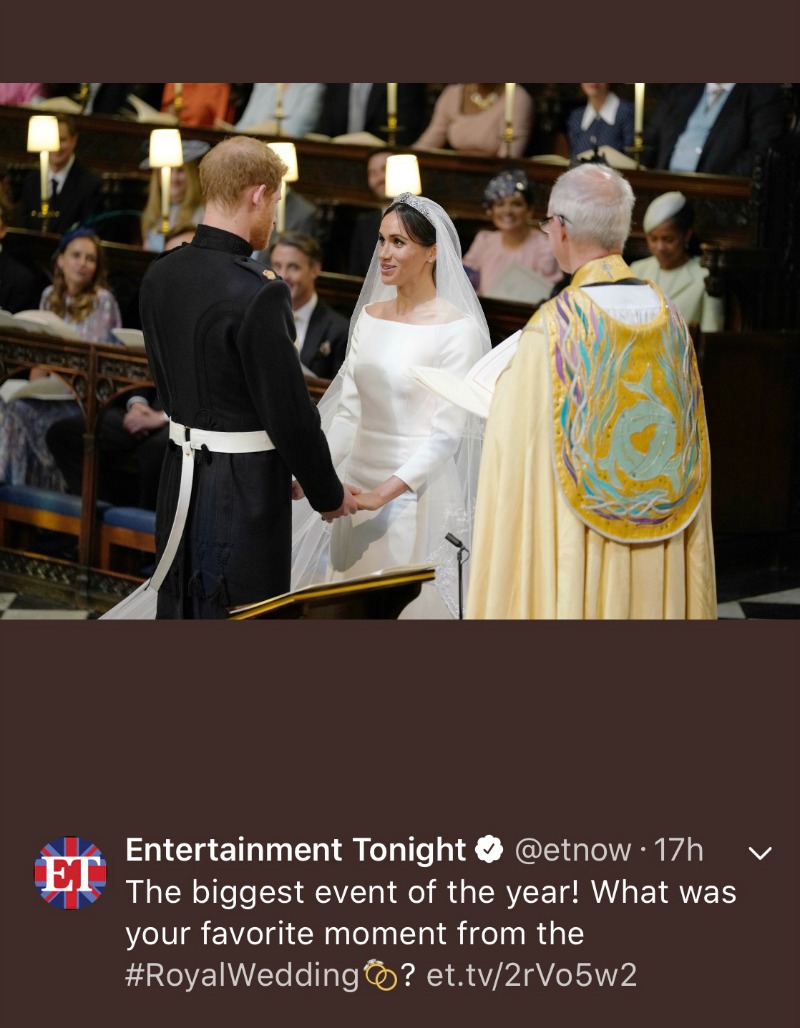 And after the ceremony there was the exit where they got to wave to the crowd! And since the wedding was in Windsor and not London they didn’t get the traditional balcony wave and kiss. Instead they got to kiss right on the steps of the church. YAS!! 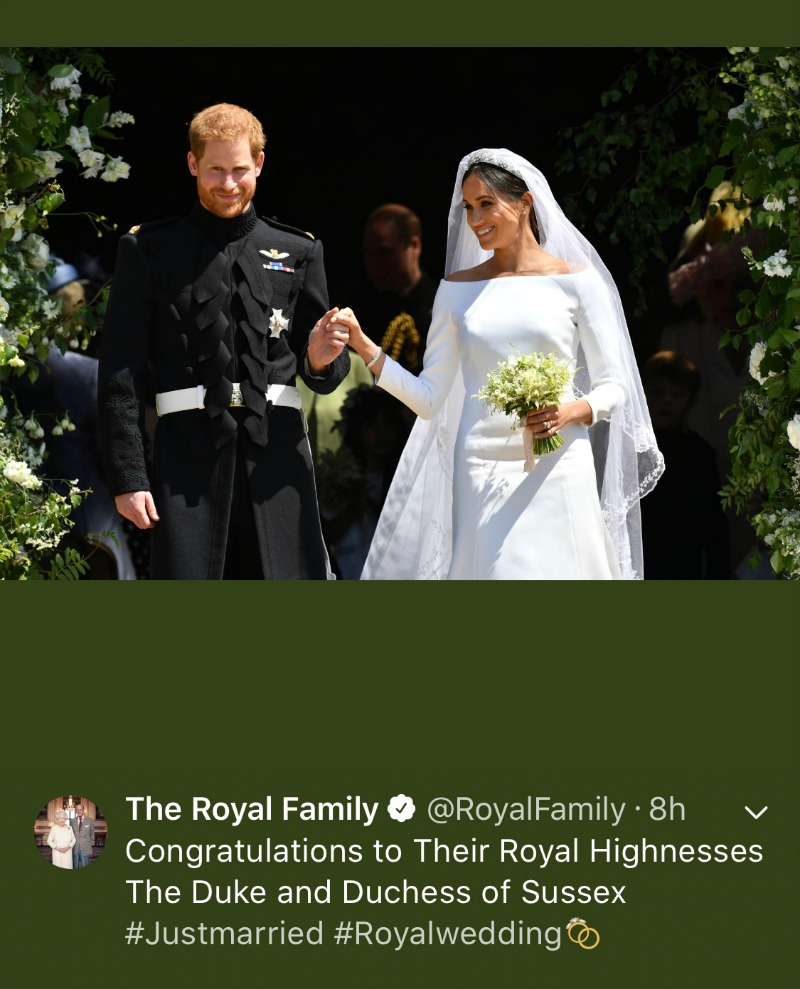 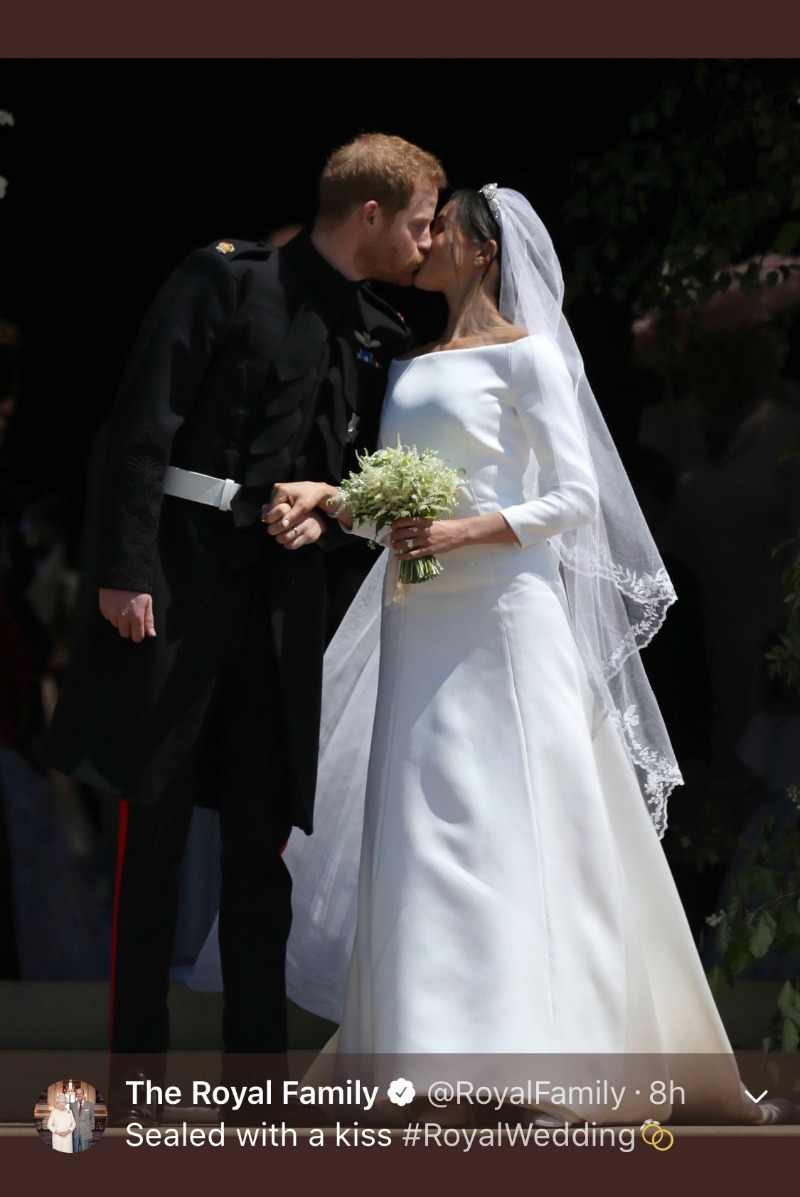 And then they hopped into their carriage and rode off into the sunset….or actually their lunchtime wedding reception. HA! 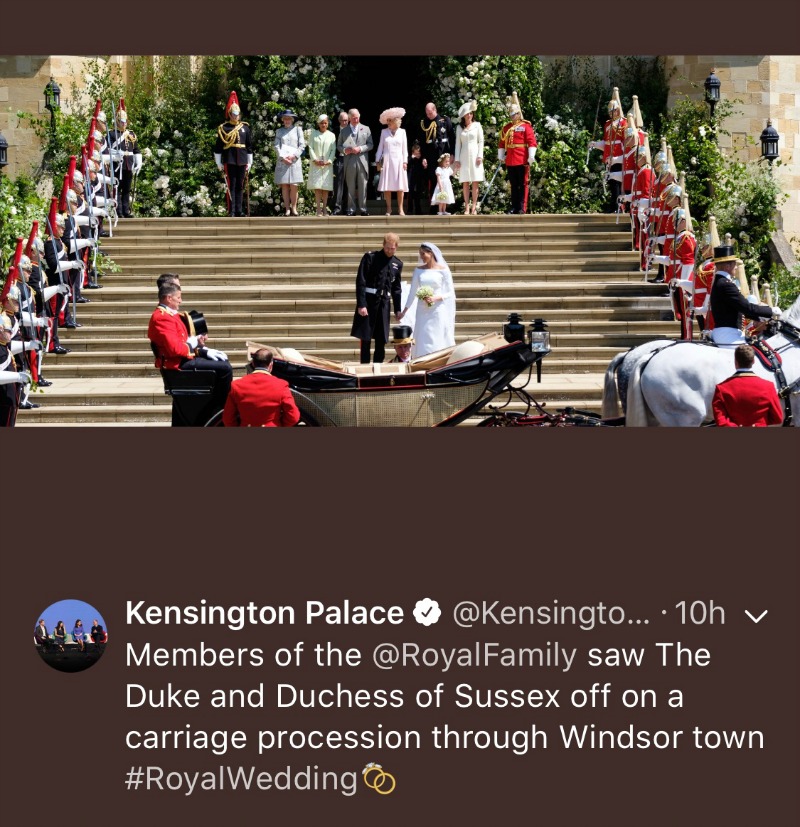 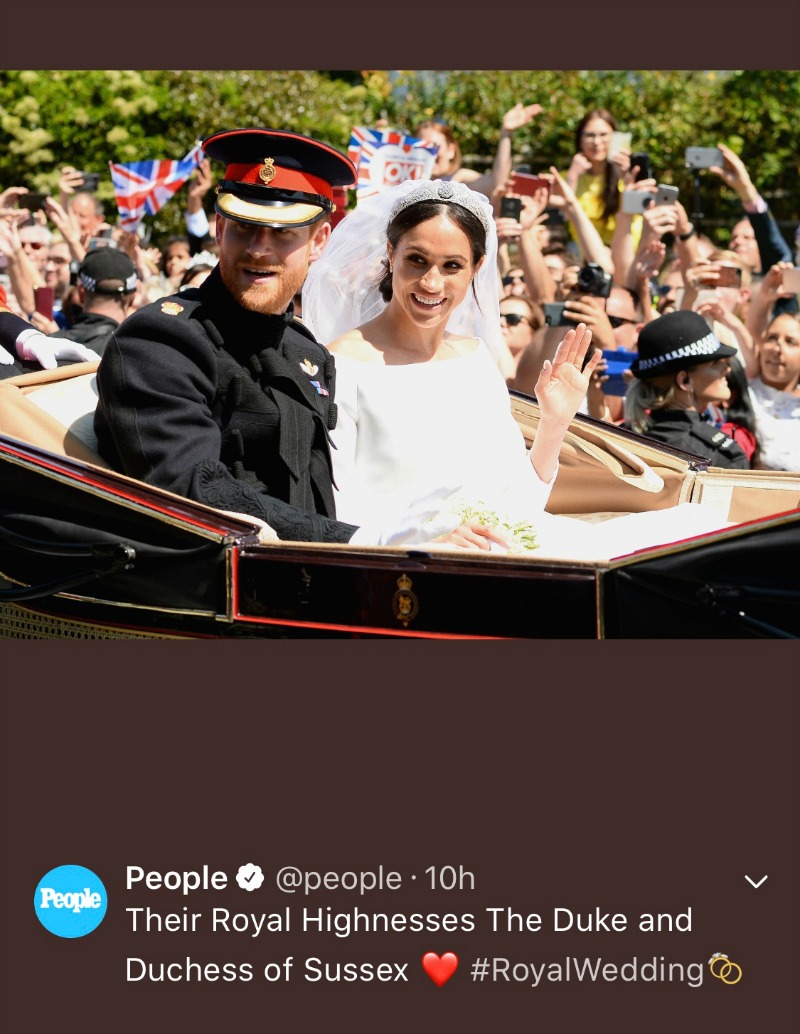 At the reception they ditched the traditional fruitcake and opted for a Lemon and Elderflower cake that was made of all local ingredients but unfortunately won’t last for years like fruitcake does. So don’t expect a piece of this cake to be auctioned off on Ebay 50 year from now like some Royal Wedding cakes are. YUCK! 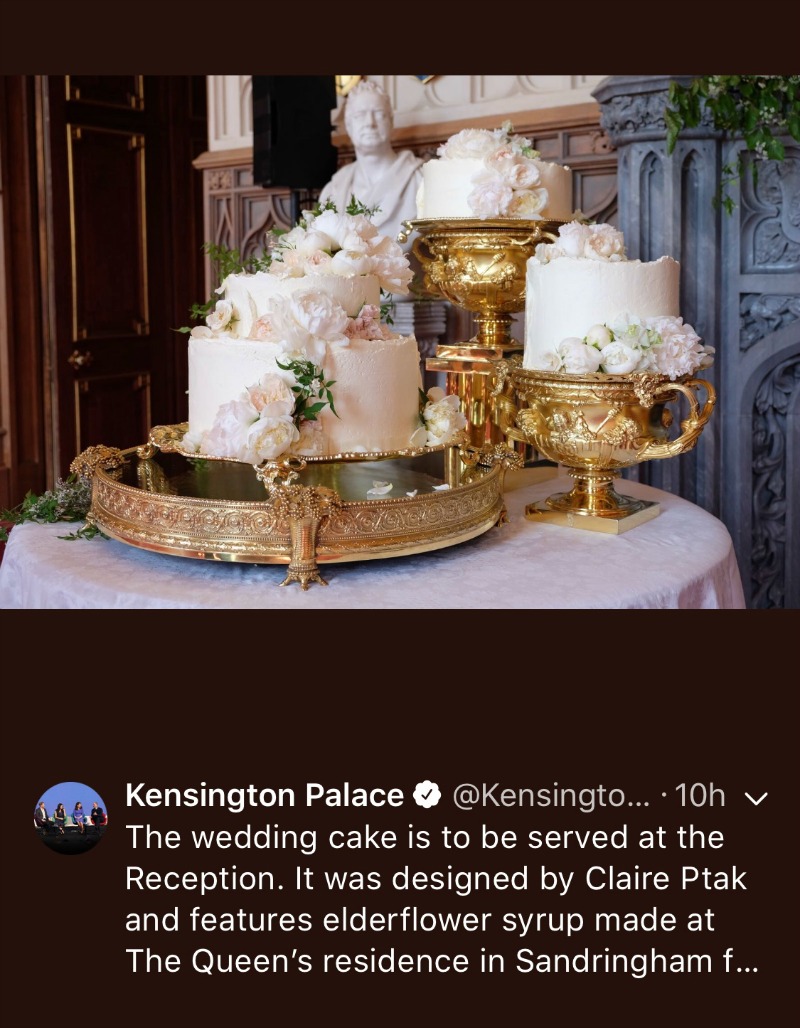 After their first reception they got changed and headed to Frogmore House where Prince Charles hosted smaller reception just for close family and friends. I may love this Stella McCartney dress more than the wedding dress, sorry Meghan! Also, did anyone else notice that she is wearing Princess Diana’s ring?? So sweet!! 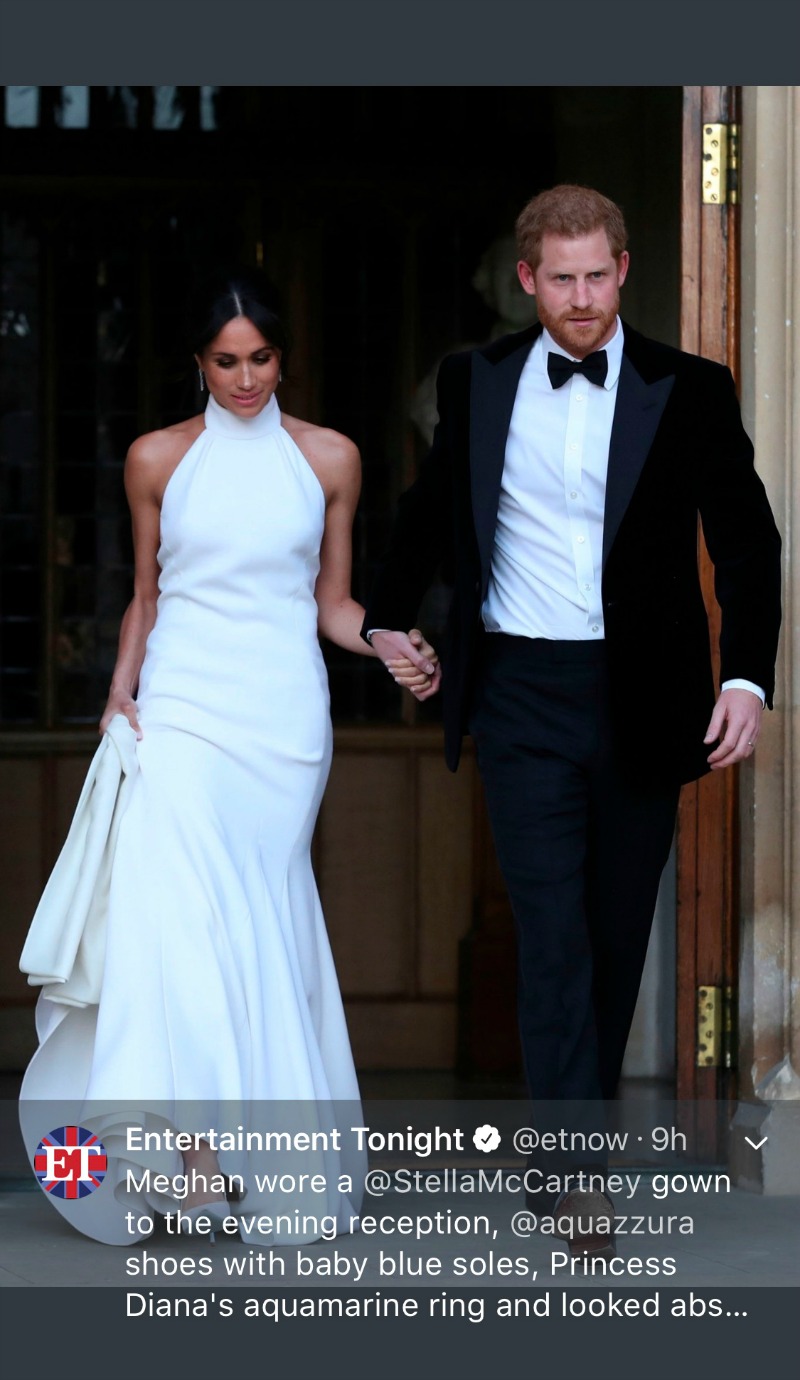 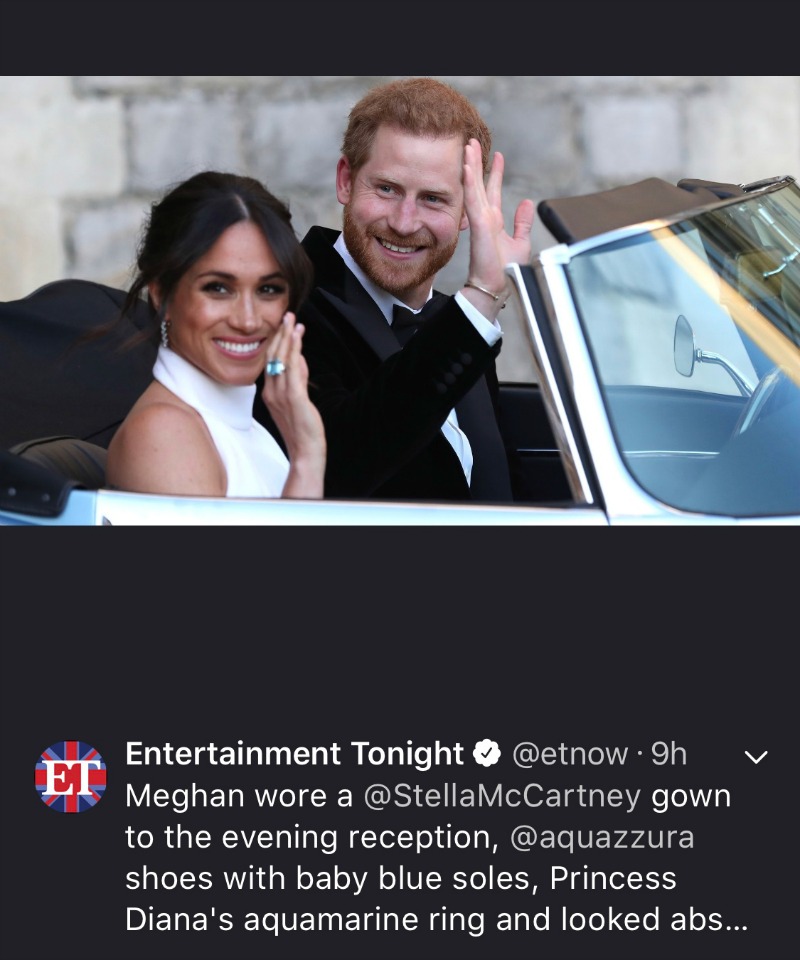 And that, my friends, is how you host a Royal Wedding in style. Congratulations to the Duke and Duchess of Sussex! And would I even be a southern woman if I didn’t ask when they are having their first baby?? LOL!!

Did you watch the Royal Wedding?? 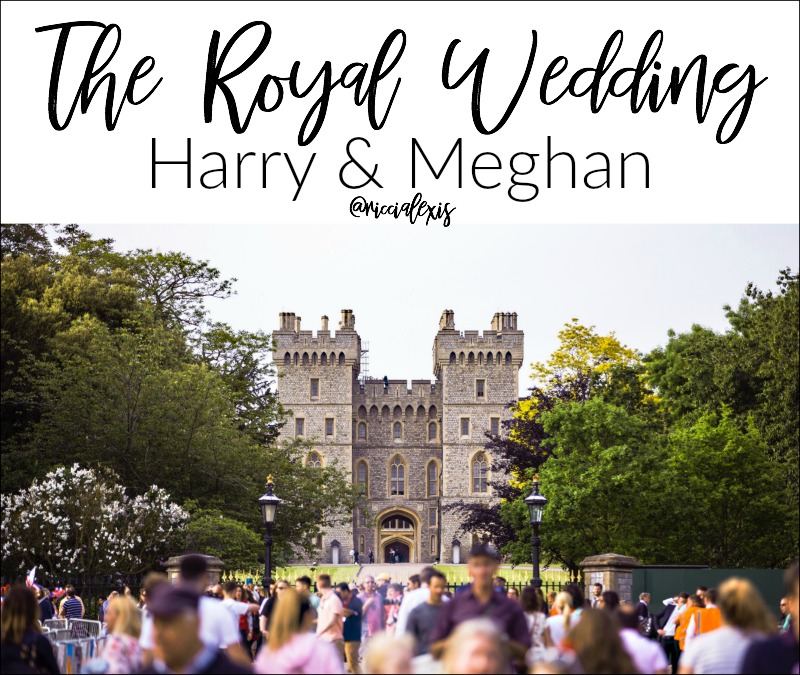