Happy Friday!!! I don’t know about you but work has been a beast this week and I am soooo looking forward to actually being off work all weekend!!! I work in a hospital (as if I don’t already mention that enough) and have to work every other weekend so I really look forward to the weekends that I don’t have to work. Know what I mean??

It’s no secret that I am Royal Family obsessed. If you have followed my Facebook page or my Twitter then you have seen all of my Royal Family posts. I am a die hard Will and Kate fan and I can’t wait to see the next Royal Wedding take place next month!! And by see it I mean watch it on TV and stalk it on social media. Let’s be real here. HA! There are so many questions I have about it…what will their titles be?? Who designed the dress?? Will her family be there??

There are sooo many things happening in the Royal Family right now that I thought I would dedicate this week’s Friday Five to them…so here we go!! 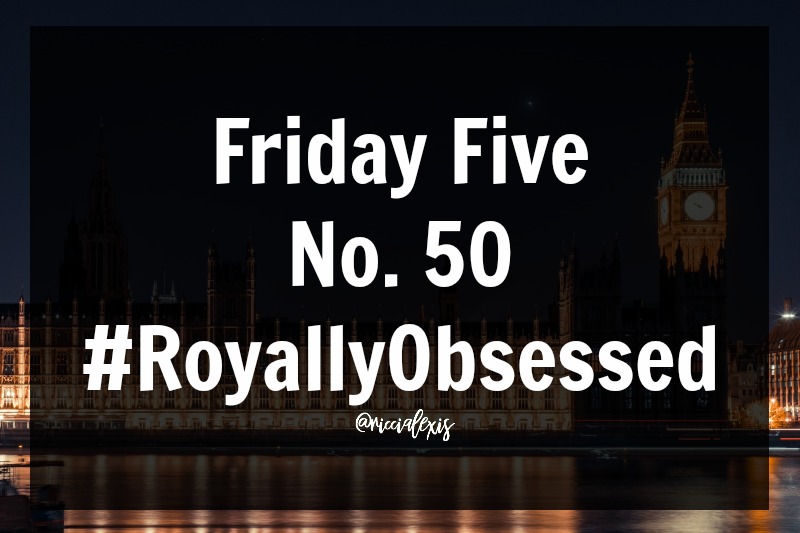 ONE. Royal Baby 3 is here!! I have so many feels about this. I am so excited for the Duke and Duchess of Cambridge but more importantly, all of the tradition that surrounds it. I love how right after the baby is born the Queen is the first person notified. I love that there is all of the fanfare outside of the hospital. I love that a town crier announces the birth (even if he’s not the “official” town crier). I love that the births are announced on a plaque outside of the palace and that in today’s technology savvy world it is also announced on social media at the same time. I love seeing Prince George and Princess Charlotte come to the hospital to see their sibling. And I love how they have the photoshoot on the steps outside the hospital. I know the Duchess got criticized for dressing up and making a show out of it but let’s face it, the people expected no less and now she can go home and stay out of the public’s eyes for a few months. Or at least until the next big royal event… 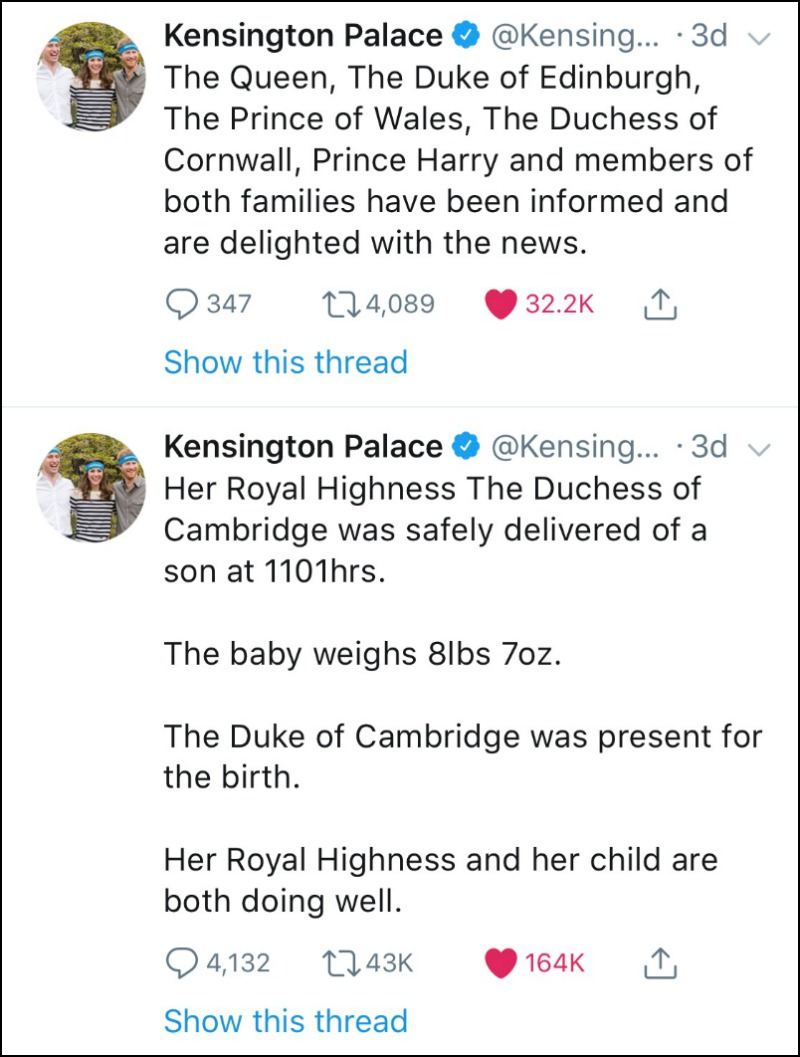 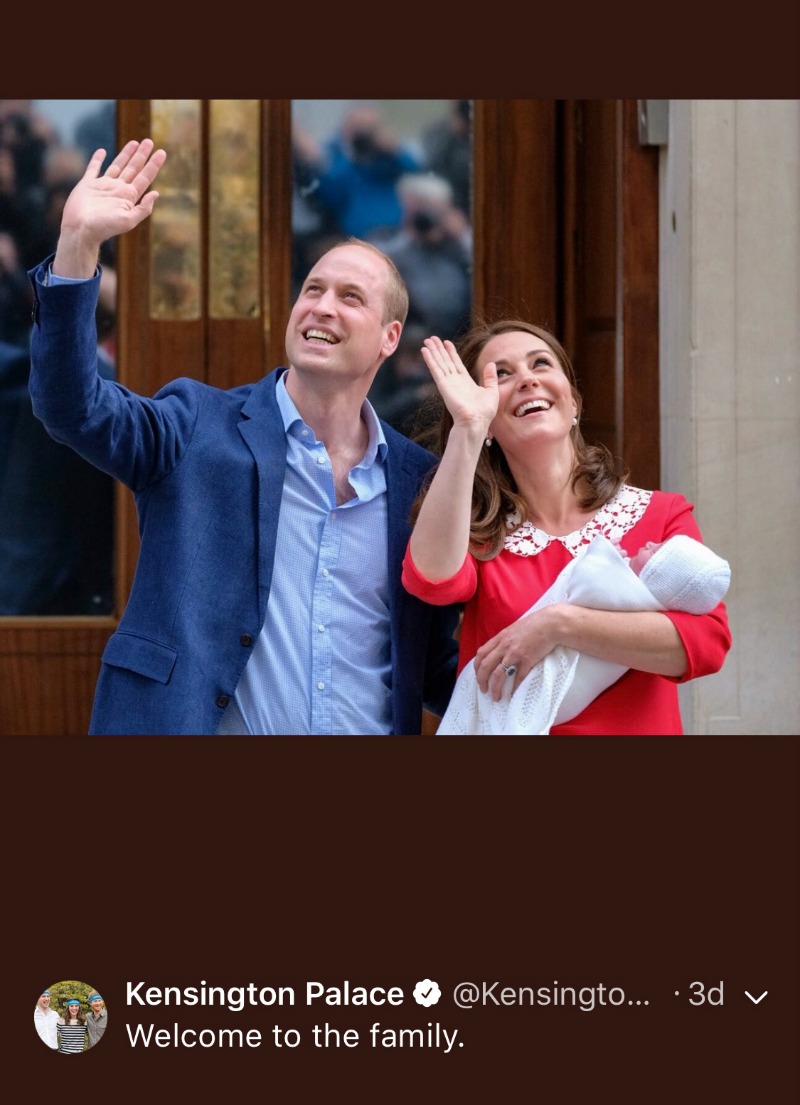 TWO. Princess Charlotte made history. With the birth of her baby bother, Prince Louis (the name was JUST ANNOUNCED!!), Princess Charlotte did not have to give up her spot in line to the throne. In the past males were always put ahead of females in the line of succession but a law was passed right before Prince George was born that says that any female born did NOT have to be moved down in line of succession if a younger male was born…more formal sounding than that of course but you get the gist. 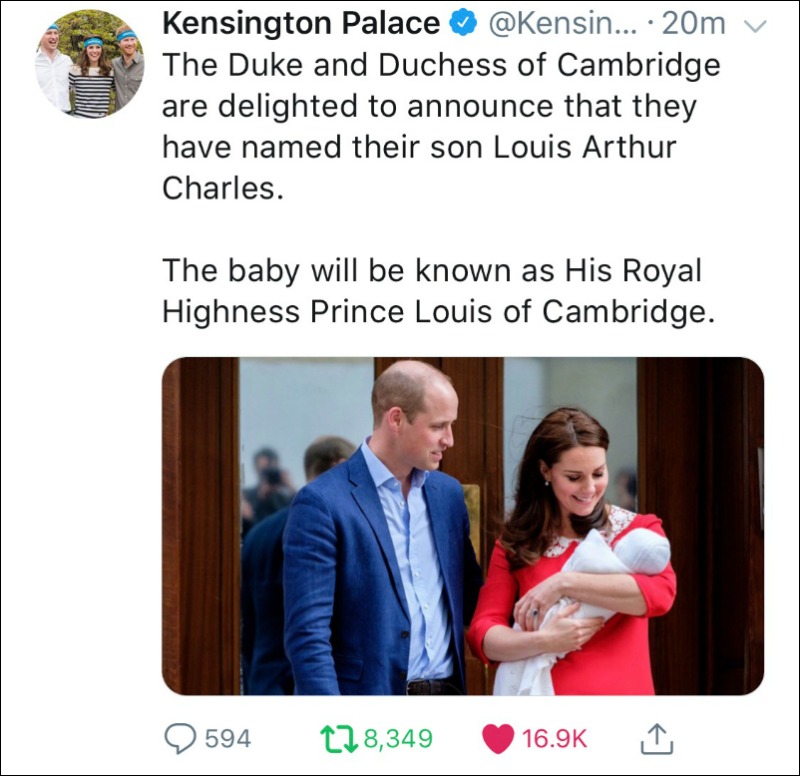 THREE. Prince Harry is getting married!! Speaking of the next big royal event, Prince Harry will marry Meghan Markle next month!! You know I’ve been out of touch on my blogging when this is the first time I have mentioned this piece of news and they have been engaged since the fall. Oops!! I can’t wait to tune in to see them on their big day and see what title they will receive from the Queen. Traditionally the “heir to the spare” gets the title the Duke of Sussex if it’s available and it just so happens that it is available so I wonder if they will get that title?? If they do then Meghan will be the first ever Duchess of Sussex! History in the making y’all!! 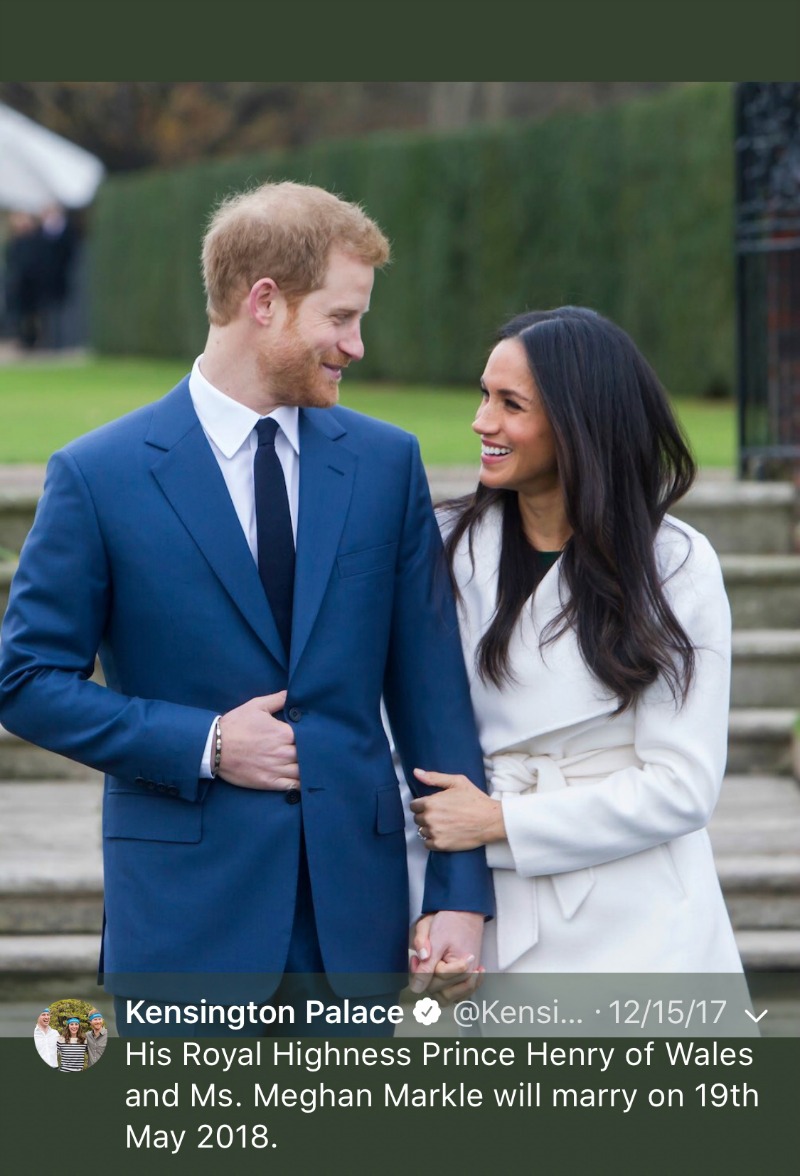 FOUR. Princess Eugenie is getting married!! This is a big year for royal weddings in the United Kingdom!! Princess Eugenie, daughter of the Duke and Duchess of York, is set to marry her fiancé Jack Brooksbank in the fall! Coincidentally they are getting married in the same place as Harry and Meghan, St. George’s Chapel in Windsor Castle. I really hope her wedding is televised as well!! 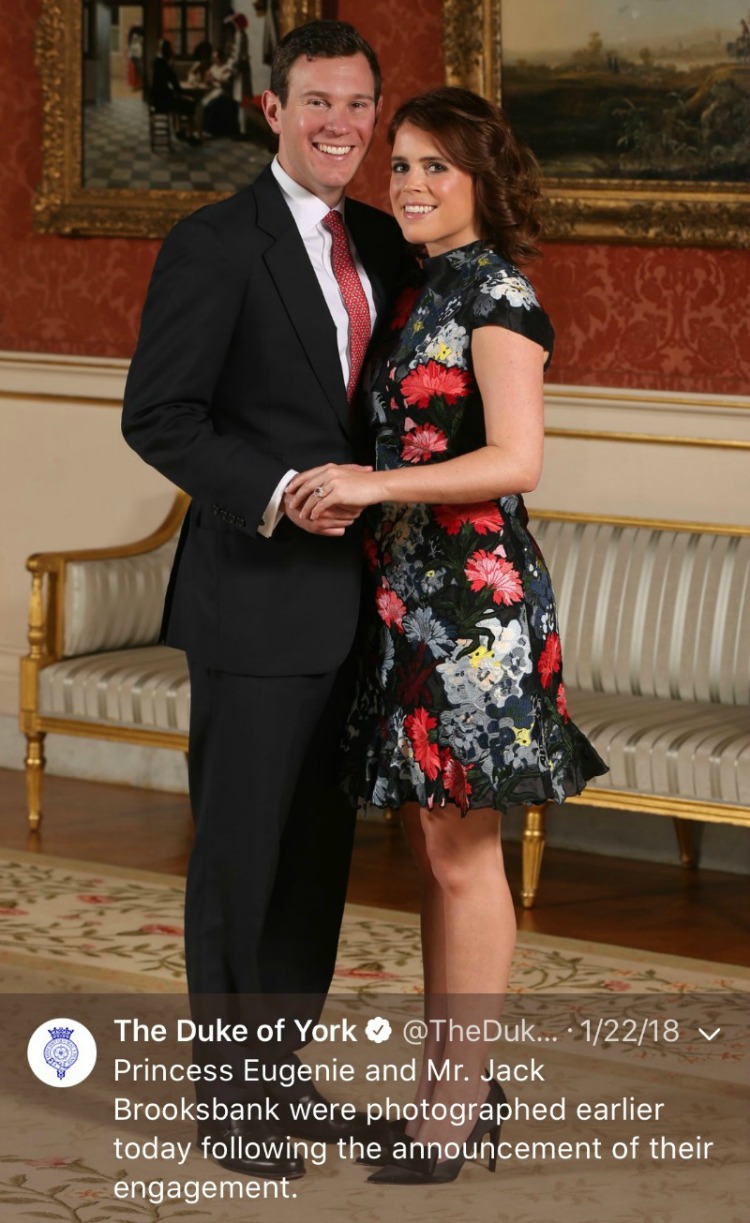 FIVE. Queen Elizabeth’s 92nd birthday!! Y’all. The Queen looks amazing for 92!! Or for any age really!! What are her secrets?? I need to know!! A lot of websites have been speculating when she will step down and hand the monarchy over to Charles, the Prince of Wales, but I don’t think she will do that. She did recently name him as her successor of the Commonwealth but I just don’t see her stepping down any time soon! Happy Birthday Queen Elizabeth! 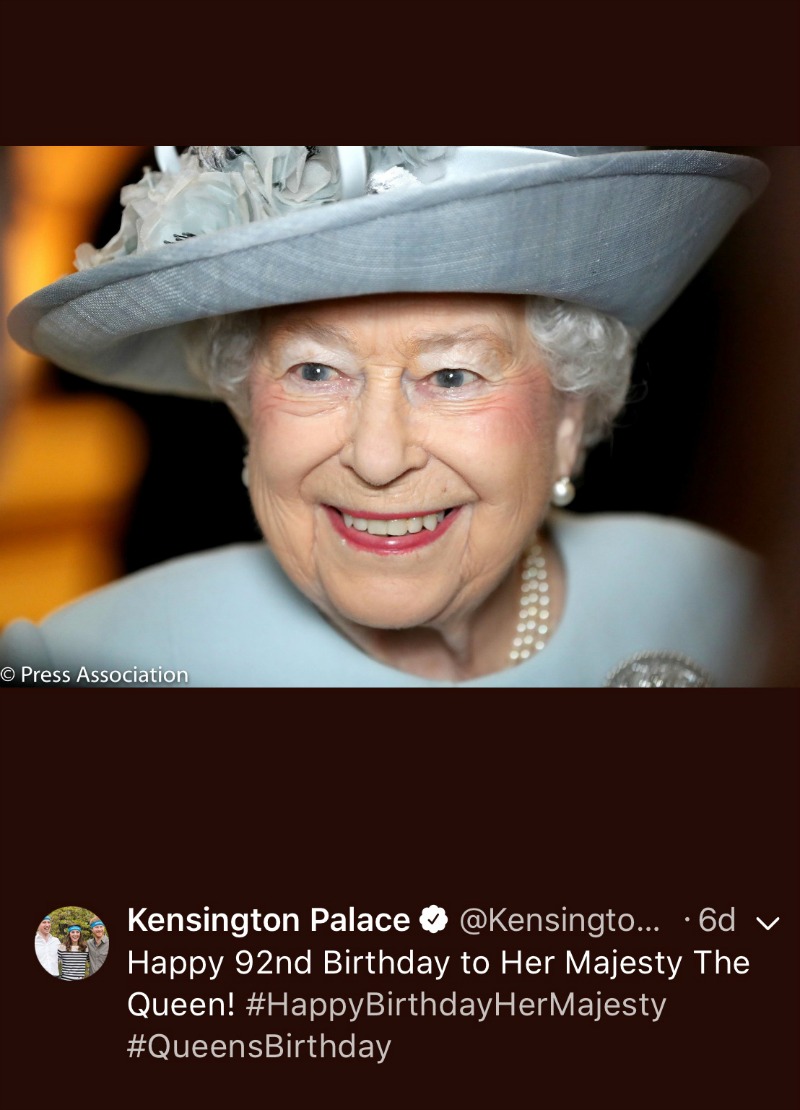 And that, my friends, is all of the royal news I have for you today!! If you are Royal Family obsessed like me then follow my hashtag… #RoyallyObsessed

Are you intrigued by the Royal Family??
Will you be watching the next Royal Wedding live on tv?? 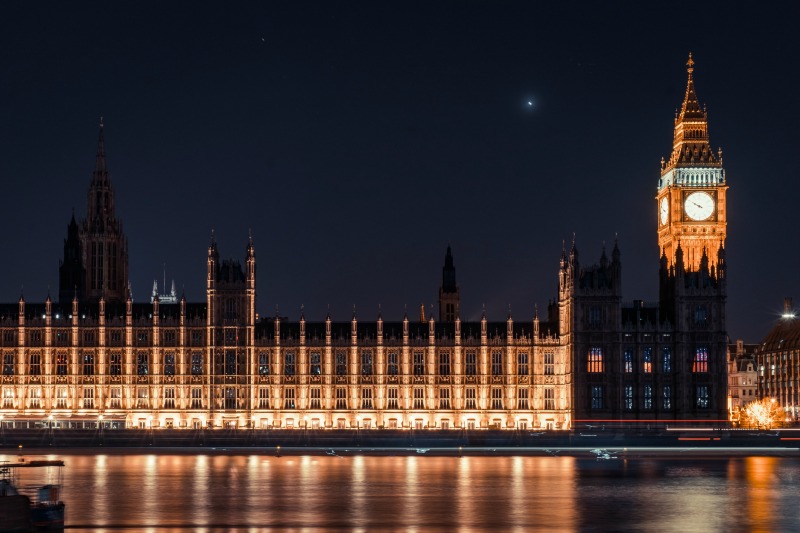