I went to a very small high school. My class was the biggest graduating class in a long time and there were only 27 of us. I told you, it was small! One of the advantages of going to a small school is that you have the opportunity to be involved in everything! I played basketball, softball, and was active in pretty much every club, my favorite being FFA.

Oh yes, this city-ish girl was a proud member of the FFA. I went to state convention every year 7th-12th grade, national convention 11th and 12th grade, was a member of the Floriculture Team (we won state my senior year of high school!!), and was President of the Parliamentary Procedure Team. I served as a chapter officer a couple years and as a district officer my junior year of high school. I ran for state officer twice but didn’t win either time. I also showed livestock at my county and state fairs…I had hogs one year and sheep for a couple years. Oh yes, this girl knows how to shear a sheep with the best of them. HA!

For your entertainment, here is a throwback pic from National Convention circa 2000 I think?? I am the second from the left…HA! 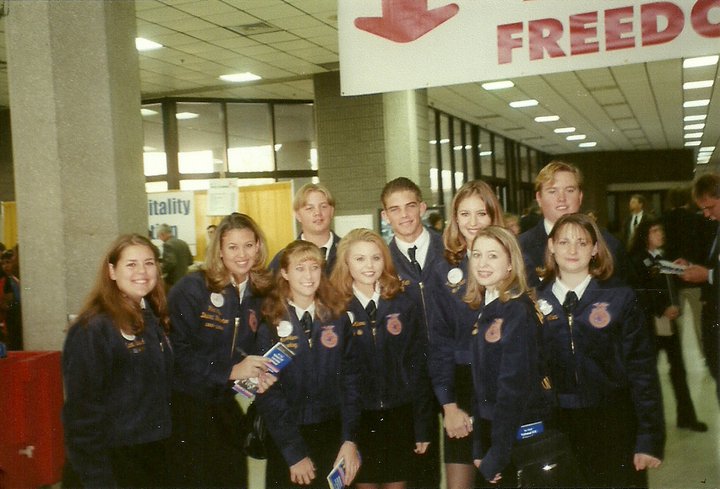 I love all of the opportunities I had because of the FFA and those are memories I will have for a lifetime. I made some of my very best friends in the FFA and one even became a sorority sister!

All that being said, last week through this past weekend was the 2015 National FFA Convention. There are so many fun things to do at convention from shopping and dances to National CDE (Career Development Event) contests and most importantly, the election of the 2015-2016 National FFA Officers.

Congratulations Taylor I wish you the very best year of your life as our National FFA President!

Were you a member of the FFA??