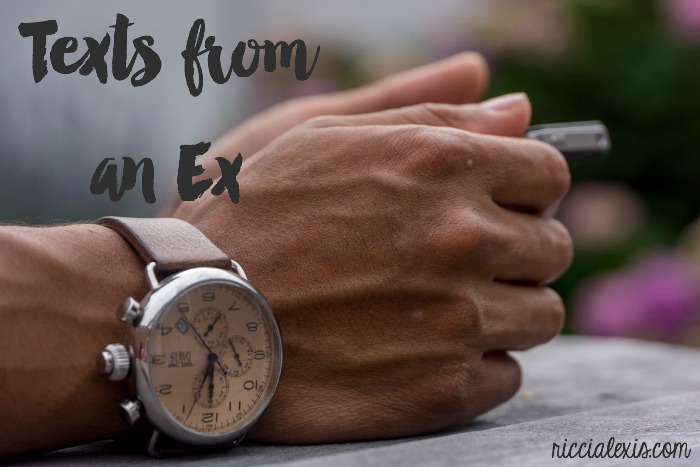 We’ve all been there. You date someone, you break up, a couple months later he texts you. Or in my case it’s been a few years and he still texts you every couple months. Dude, get over it.

This sort of goes along with my FREE theme for this year, freeing myself from my past. It’s a hard pill to swallow and hard to say Stop but it can be done.

Every time this certain ex texts there are always several responses that pop into my head….anything from “Heeeeey” to “Leave me alone” to “Eff you”. But I think my personal fave is…

Yes, I did just nerd out and use a Harry potter gif.

I’m going to admit right now that I am a softie. I usually do wind up talking to him and then it just puts me in a bad place. I start thinking that we will get back together and live happily ever after but deep down I know that that will NEVER happen.

It’s like he has a radar on my head and knows when I am happy and have stopped thinking about him and then BOOM! He texts. It’s always something super sweet too like “I have been thinking about you and miss you soooo much!” Or just a simple “I love you”. And I fall for it every. single. time. But not anymore. Remember, this year I am freeing myself of everything that isn’t good for me and friends, he is toxic.

I love the IOS7 update on my phone for several reasons but one is that fabulous little block contact feature. I now have him blocked and hopefully he won’t figure it out and just think I am ignoring him. Hopefully I won’t unblock him.

What do you do when an ex texts?